Despite losing early wickets on day two New Zealand crossed 400-run mark and then made sure they drag Pakistan on back foot by removing openers, Taufeeq Umar and Shan Masood. 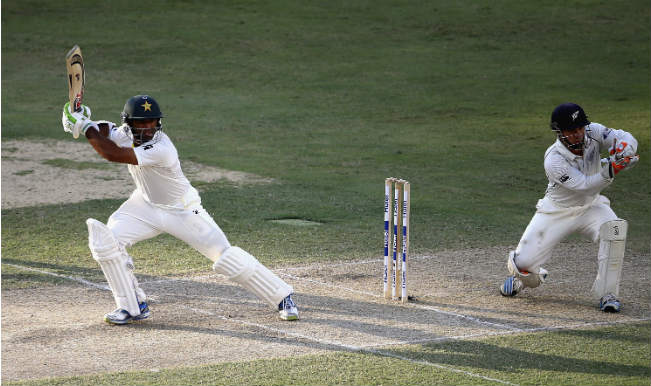 Despite losing early wickets on day two New Zealand crossed 400-run mark and then made sure they drag Pakistan on back foot by removing openers, Taufeeq Umar and Shan Masood. New Zealand’s 1stinnings ended on 403, with Zulfiqar Babar scalping four wickets and then in response at stumps on day two Pakistan were 34-2.In case you missed out on action here are the highlights of the day’s play. Also Read - As India Boosts Security at LoC, Pakistan’s ISI Tells LeT and Hizbul chiefs to Push Militants into Valley

Pakistan strike early: Resuming at an overnight score of 243-3, New Zealand got off to a shaky start and lost early wickets on day two morning. Corey Anderson was the first one to go and soon after him, Tom Latham was dismissed without adding anything to his overnight score of 137. Few overs later leg-spinner Yasir Shah further dented New Zealand when he removed Jimmy Neesham with scoreboard reading 278-6. Also Read - Safdar Awan, Nawaz Sharif's Son-in-law, Arrested in Karachi After Wife Maryam's Fiery Speech

Pakistan strike back: Just when Watling and Craig were going at a good pace, Pakistan struck back with some quick wickets. Part-timer Azhar Ali first removed Watling and then in next over Babar trapped Craig in front of the wickets.And then after Tea break Tim Southee also fell to Babaras New Zealand’s ninth wicket on the score of 387.

New Zealand 403-Allout: Trent Boult was the last wicket to fell for New Zealand, when he was caught off Babar, giving the spinner his fourth wicket. Ish Sodi who took Kiwis past 400-run mark remained unbeaten on 32.

Pakistan lose openers: The new opening pair of Taufeeq Umar and Shan Masood failed to provide Pakistan with a solid start as they both fell to New Zealand spinners.Ish Sodhi bowled a peach of a delivery to send back Masood,as the ball spun from outside off to hit his middle stump.Few overs later, Mark Craig struck as Umar failed to put his foot back in time and was stumped. At close of play Azhar Ali and Younis Khan were the two batsmenat crease for Pakistan with score reading 34-2.