The fans of the popular pop band, Jonas Brothers were left ecstatic when they released their comeback song ‘Sucker’. The fever of the song featuring Priyanka Chopra, Sophie Turner and Danielle Jonas took the internet by storm. Now, it looks like that the fever has hit Parineeti Chopra. Yes, you heard us right! Lately, she took to Instagram to share a BTS video from an ad shoot where she can be seen grooving to ‘Sucker’ and it has all hearts. In the post, she called it her ‘jam’ and also revealed that the peppy song helped her get into the mood of the shoot. Also Read - Priyanka Chopra to Soon Open Her Indian Restaurant in New York, Shares Pictures of Puja Ceremony

Sharing the video, she wrote, “My jam to get into the mood for the scene yesterday!! Haha @nickjonas Whatsay!”(sic) Also Read - Saina Nehwal Gives Big Shout Out To Parineeti Chopra As She Loves 'Mini Saina' Look | See Poster

In the video, the Kesari actor can be seen donning a green dress and is sporting nerdy round glasses. She can be seen lip-syncing and grooving to the popular song. Also Read - Neither Badminton Nor Tennis, Amol Gupte Reveals What Trolled Saina Poster Really Stands For

My jam to get into the mood for the scene yesterday!! Haha @nickjonas 🎤🎹 Whatsay!

After the video was uploaded, both Priyanka and Nick commented on the post. While Priyanka wrote, “Hahaha I love” with a laughing emoji, Nick commented, “Haha love it!” 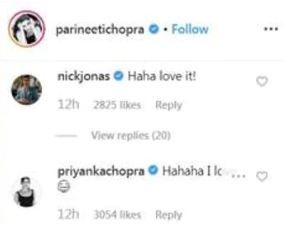 The track topped the Billboard charts instantly and turned out to be an all-time favourite across the platforms.

In the video, Nick can be seen donning red trousers and a matching vest, Kevin sported a red and black sequinned suit and Joe was seen in an all-black look. Priyanka, on the other hand, can be seen dressed in a funky pink costume riding a little bicycle.

Meanwhile, on the work front, Parineeti will be next seen in the Hindi remake of The Girl on The Train. She will play the character of an alcoholic divorcee who gets involved in unexpected circumstances while aimlessly riding on a train. Apart from this, she will also be seen in the biopic on ace Indian shuttler Saina Nehwal. The actor has also got Jabariya Jodi with Sidharth Malhotra lined-up for release this year.