Petrol Price Hike: Here is What You Can Do With Rs 76 in Delhi-NCR; Check Out

Ever wonder what all can you buy with Just Rs 76 in the Delhi?

With petrol prices rising high and people raging over the hike, did you ever wonder what all can you buy with just Rs 76 in Delhi or do around the city? Well, ever thought of revisiting the historical monuments in around the city? Yes go around in the Hogo bus and relive the ancient history of Mughals. A day out at Hauz Khas village where you can enjoy the beauty of nature and try to get some inner peace and if you are a foodie, try the old Delhi street food at Chandni Chowk. For all the shopaholics, Sarojini is the place to buy clothes at the price of one litre of petrol. Also Read - Next One on Imran Khan: Shashi Tharoor Responds To Pakistani Comedians Viral Video on His English

With fuel prices making a hole in common man’s pocket, we look at the things you can buy at the price of one litre of petrol in Delhi:

♦ A packet of salt

♦ A 20-litre bottle of mineral water

♦ A packet of sanitary napkins

♦ Travel in Delhi Metro from Noida to Gurgaon in Rs 45

♦ Travel in DTC bus within the city in just Rs 30

Have a look at some old tweets 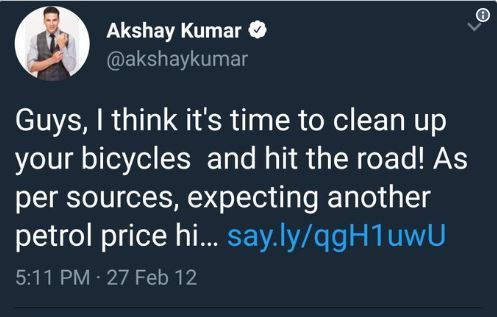 Don’t worry abt petrol , sending u a pic of gobar all u hv to do vit it is make gas. N v hv gobargas http://twitpic.com/1no7hh

Recently, netizens have dug out an old post by Bollywood celebrities and some politicians on petrol price hike in the year 2012. Actor Akshay Kumar also went on to delete his old post of 2012 where he wrote, “Guys, I think it’s time to clean up your bicycles and hit the road! As per sources, expecting another petrol price hike.”