Australian skipper Michael Clarke broke down as he read out Cricket Australia's tribute for Phillip Hughes. 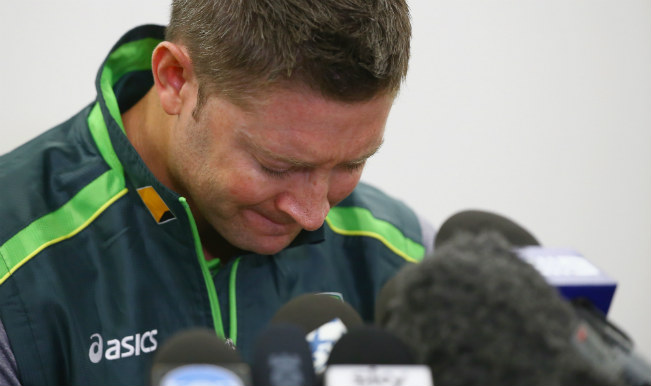 Australian skipper Michael Clarke broke down as he read Cricket Australia’s tribute for Phillip Hughes. Hughes died on Thursday following a head injury. Hughes suffered a blow on his head by a Sean Abbott bouncer  during a Sheffield Shield match between South Australia and New South Wales. He was in a state of induced coma for two days at St Vincent’s Hospital before his family decided to take off the life-support system. Also Read - India Tour of Australia 2020-21: BCCI President Sourav Ganguly's Request For Shorter Quarantine in Down Under Likely to be Rejected by Cricket Australia

The statement from Clarke read, “Words cannot express the loss we all feel as a team right now. To Greg, Virginia, Jason and Megan we are sharing the deep pain that you are feeling. Apart from when he was home on the farm with his beloved cattle, Hughesy was at his happiest playing cricket for his country with his mates. Things were always put in perspective when Hughesy said: ‘Where else would you rather be, boys, but playing cricket for your country. We’re going to miss that cheeky grin and the twinkle in his eye. He epitomised what the Baggy Green is about and what it means to us all.” Also Read - COVID-19 Aftermath: Australia Faces Recession For First Time in 30 Years

He continued, “The world lost one of its great blokes this week and we are all poorer for it. Our promise to Hughesy’s family is that we will do everything we can to honour his memory. Last night I asked Cricket Australia if Hughesy’s one-day international shirt number, 64, could be retired, to which they agreed. That means so much. His legacy of trying to improve each and every day will drive us for the rest of our lives. We’d like to thank everyone both here and overseas for the touching tributes to Hughesy in recent days. Our dressing-room will never be the same. We loved him and always will. Rest in peace, bruzzy”

Clarke chocked and struggled his way through the statement. A great gesture by the Australian cricket team. we at India.com too wish may Phillip Hughes rest in peace. Do watch the emotional video.