In an emotional moment, the Australian captain Michael Clarke showed great courage as he read out a statement on behalf on Phillip Hughes family, Greg, Virginia, (Phil's parents) Megan (sister) and Jason. 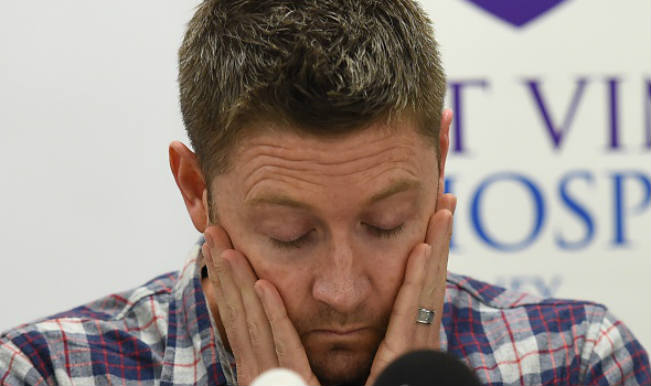 In the dark hours of Australian cricket and the sporting world in general for the loss of young Australian Test batsman Phillip Hughes, who died two days after being hit by the deadly bouncer, everyone joined in the support of the deceased’s family. But the courage and support shown by the national side’s captain Michael Clarke in this need of hour has been profusely lauded by Phillip Hughes’s family. Michael Clarke who was beside the dying Phil and his family’s side for the last two days played the role of ‘Big Brother’ to the family. Also Read - Aaron Finch Dismisses Michael Clarke's Controversial Claim, Says Test Series vs India Was Played in 'Right Spirit'

In an emotional moment, the Australian captain Michael Clarke showed great courage as he read out a statement on behalf on Phillip Hughes family, Greg, Virginia, (Phil’s parents) Megan (sister) and Jason. A visibly upset Clarke battled his emotions during the press conference as he read out the statement, “We are devastated by the loss of our much-loved son and brother, Phillip. It’s been a very difficult few days and we appreciate the support we have received from family, friends, players, Cricket Australia and the general public. Cricket was Phillip’s life, and we as a family shared that love of the game. We would like to thank all the medical and nursing staff at St Vincent’s Hospital and Cricket NSW medical staff for their great efforts with Phillip. – we love you.” Also Read - Michael Clarke Rejects Claim he Was Behind Simon Katich's Axing After Dressing Room Altercation

During the entire speech, stoic Clarke did not look up to the onlookers present at conference. Once finished, he left the room without a glance back before Cricket Australia CEO James Sutherland joined in talking about late Phillip Hughes.