His family released a statement, which said ‘the outcome of that surgery is unlikely to be known for the next 24 to 48 hours.’ 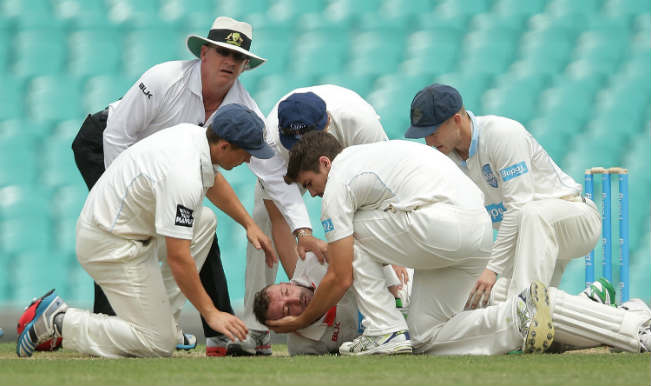 Phillip Hughes, who is four days short of celebrating his 26th birthday, still remains critical after being hit by killer bouncer during a Sheffield match while playing for South Australia. The 25-year-old, underwent an immediate surgery and is currently fighting for his life at Vincents Hospital in Sydney’s inner suburbs. The entire cricketing world and well-wishers around the globe is praying for the quick recovery of Aussie player. Also Read - Aaron Finch Dismisses Michael Clarke's Controversial Claim, Says Test Series vs India Was Played in 'Right Spirit'

Everything seemed to going well for the young 25-year-old Hughes who looked forward to sealing his place for the Brisbane Test against upcoming home series against India, till a killer bouncer struck him hard. Playing for South Australia’s Sheffield Shield clash against New South Wales, a mistiming against a brutal bouncer delivery from Sean Abott got him knocked out. Also Read - Michael Clarke Rejects Claim he Was Behind Simon Katich's Axing After Dressing Room Altercation

The video highlights the tragic series of events when a confident looking Phillip Hughes, batting at 63 tried to play a pull shot but completely miscued the bouncer delivery which goes on to hit him on his head. Hughes does not immediately fall but is shown moving aside before collapsing on the ground, much to horror of players and onlookers. There are disturbing images as Hughes complains of not being ‘able to breathe’.

Hughes was immediately helped by his team-mates and opponents from South Wales who called for help from the dressing room. He was airlifted to Vincents Hospital as three ambulances and a helicopter were readily available to treat and transport him to the hospital. He has currently undergone a surgery and in induced coma. His family released a statement, which said ‘the outcome of that surgery is unlikely to be known for the next 24 to 48 hours.’