Slated for a December 19, 2014, the release of the film is rumoured to be a satirical drama on Hindu gods and god men. Watch the amazing video below to know the biggest secret of the lead actress. 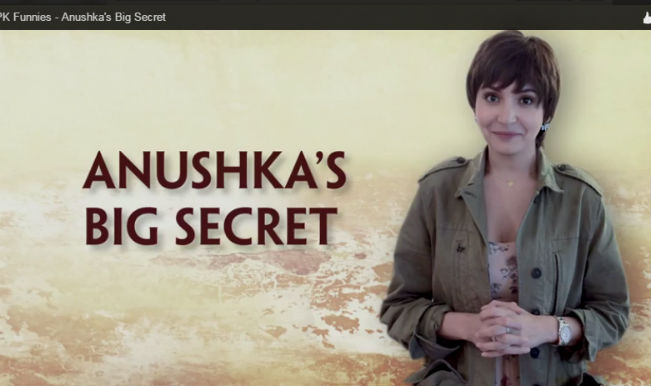 With only a few days left for Aamir Khan and Anushka Sharma’s PK to hit the box-office, the film makers have a lot on their plate to promote the movie on all grounds. No other movie has ever done something as comprehensive as the team of PK is doing. They have released a set of funny videos which gives the audiences a glimpse of the film during the shooting. A few months ago, they had released PK Funnies – The Fat barber video and Over Acting funny clip from the movie. Also Read - Anushka Sharma-Virat Kohli Send Special Gifts to Paparazzi Requesting Them to Not Click Their Daughter

Here is a new clip titled – ‘Anushka’s Big Secret’ which is yet another funny clip captured during the shooting of PK. The funny video starts with Anushka Sharma talking on camera and talking about her audition for 3 idiots where she was rejected. This is the biggest secret of Anushka and no one even knew about it, not even Raju Hirani. Also Read - Virat Kohli And Anushka Sharma Request Paparazzi to Not Click Photographs of Their Newborn Daughter

Anushka reveals that her audition clip in front of PK director and lead actor, let’s see what happens next? Aamir Khan’s reaction to Anushka’s audition is amazing, we hope you won’t like to miss the PK actors unique expression. She monologues the emotional dialogues from Munna Bhai MBBS and even Aamir is shocked to see Anushka crying without using glycerin. While giving the audition, she a treat for the eyes and conveys the emotional scene with conviction and with ease. Watch out to know how Raju and Aamir reacted after seeing the entire clip?

Co-produced by Rajkumar Hirani, Vidhu Vinod Chopra and Siddharth Roy Kapur, PK also stars Sanjay Dutt, Anushka Sharma, Sushant Singh Rajput, Boman Irani and Saurabh Shukla. Slated for a December 19, 2014, the release of the film is rumoured to be a satirical drama on Hindu gods and god men. Watch the amazing video below to know the biggest secret of the lead actress.