PK Song Making: Why Aamir Khan thinks Love is ‘not’ a waste of time? (Video)

The recent romantic number ‘Love is a waste of time’ saw a cute chemistry between Anushka Sharma and Aamir Khan. 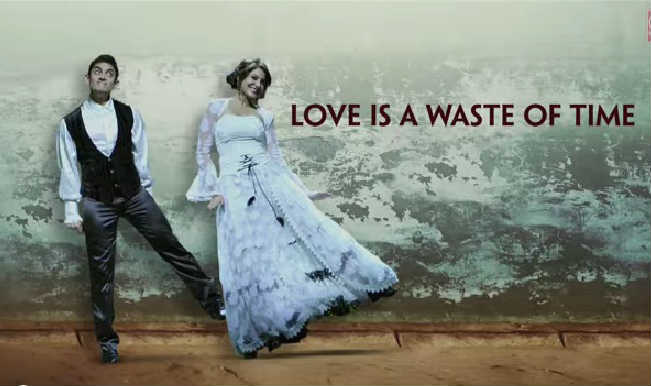 Rajukumar Hirani’s PK is one of the most awaited films of the year. The movie has been in news since it was first announced by the film maker. Aamir Khan posing nude in the poster, delectable and wide-eyed look of the Dhoom 3 actor in the trailer, Anushka’s new pixie cut, the quirky songs- they have all got too much attention making the upcoming satirical comedy a must watch! Also Read - Mom-to-be Anushka Sharma Looks Super-Adorable as She Flaunts Her Baby Bump in an Beige-Brown Dungaree And Gets a 'Pocketful of Sunshine'

Besides, the filmmakers have been tight lipped about PK’s plot and Aamir’s character in the movie. However, rumour has it that PK could be an alien and hence Aamir practices such cute antics and mannerisms in the film. Also Read - Anushka Sharma Looks Pretty in Peach as She Basks in the Sun, Don’t Miss Her Cute Baby Bump

The recent romantic number ‘Love is a waste of time’ saw a cute chemistry between Anushka Sharma and Aamir Khan. Mr Perfectionist was at his romantic best and is trying his best to woo the Jab Tak Hai Jaan actress. To add spice to the buzz around the movie, the PK team has recently released the making of the song. The making video gives us a brief idea of efforts put in by the team to make the song.

The music director, Shantanu Moitra talks about dilemma they had finalising the music for this cute number. He says, the director (Rajkumar Hirani) wanted a basic sound that would perfectly resemble the child-like chemistry between Aamir and Anushka in the film. Once they finalised on the cute tapping sound as the music, the lyricist Amitabh Verma penned the verses for the romantic melody. Amitabh confesses that the line ‘Love is a waste of time’(which was the concept of the song) was Raju Hirani suggested and not his. The 3 Idiots director also reveals why he feels love is a waste of time and still people want to fall in love in the making.

Watch the making of the song below to see whether Aamir and the crew think if ‘Love is a Waste of Time’.