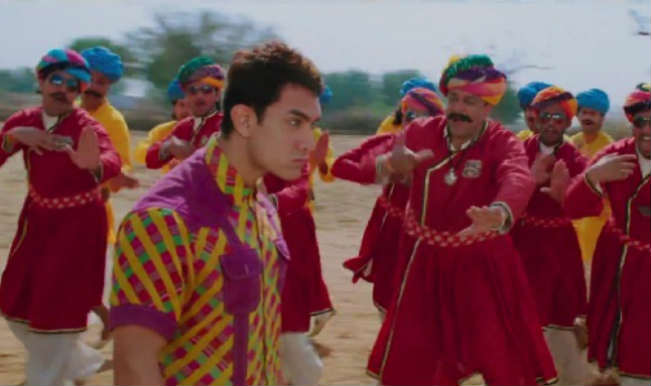 PK’s very first song Tharki Chokro had won million hearts with its Rajasthani folk touch and its colorful look. The song features Mr. Perfectionist and Sanjay Dutt shaking their legs on the backdrops of a rural set-up. Tharki Chokro was the last song shot by the Munna Bhai MBBS actor before his imprisonment. Crooned by Rajasthani folk singer Swaroop Khan, the melody became an instant hit for its vibrant touch and funky lyrics. Also Read - Aamir Khan Continues Shooting For Laal Singh Chaddha Despite Rib Injury

The film-makers have left no stones unturned to keep the movie in buzz. Unfortunately, Sanjay Dutt owing to his prison term cannot be a part of the promotional stunts. Must say, we miss Munna Bhai’s might presence in the B-Town and hope he is back on the movie circuit soon. Also Read - Sanjay Dutt Looks Fit And Fabulous in New Pictures After Assuring Fans That he Would Beat Cancer

Recently, the making of the PK song was released. The video gives us a glimpse of the fun the crew had while shooting every bit of this Rajasthani number. The song has been choreographed by Ganesh Acharya, who has also choreographed award winning songs in Bollywood. Raju says, ‘Ganesh Acharya manages to get that desi feel (rural appeal) very well. Being a director, he quickly understood that apart from dancing, we also need some story to be woven into the song.”

Also director Rajkumar Hirani opens up on how he decided to finalize Marathi composers Ajay and Atul for this Rajasthani song and how they came up with this beautiful track perfectly. Producer Vidhu Vinod Chopra also contributed his view on Aamir and Sanjay’s pairing, “When I think of Tharki Chokro, I think of Sanjay Dutt and Aamir Khan for the first time together. It’s memorable.” He further adds that, “Munna Bhai and Rancho together in one movie is called PK.”