The PM's bright yellow 'gamcha' had a pattern of small circles in green over it.

New Delhi: Leading by example, Prime Minister Narendra Modi on Friday was seen covering his face with a mask while interacting with Sarpanchs from across the nation via video conference on the occasion of Panchayati Raj Diwas. Also Read - PM Inaugurates e-GramSwaraj Application And Swamitva Scheme | All You Need to Know

Well, just like last time, he again opted for a traditional ‘gamcha’ as mask to cover his mouth and nose, however, later took it off while interacting with the Sarpanchs.

The PM’s bright yellow ‘gamcha’ had a pattern of small circles in green over it. Watch the video here:

Interacting with Sarpanchs across the country through Video-Conferencing on Panchayati Raj Divas. https://t.co/irKVx4lKN6

Prior to this, he was seen donning a white, black and red ‘gamcha’ while addressing the nation on April 14, the last day of the first phase of the lockdown. He had even also changed his profile pictures on social media with one from the address to the nation, sporting the ‘gamcha’ covering his mouth and nose.

Many other ministers too followed his example and put pictures of wearing face covers on their Twitter profiles. 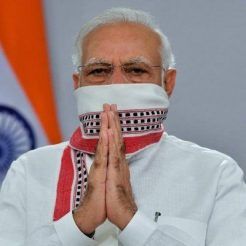 Earlier, in an interaction with the Chief Ministers of various states, PM Modi was seen wearing a homemade mask. Modi’s decision to ditch commercially made masks on several occasions is being seen as an attempt to make a point about how everyone can easily take precautions during the coronavirus crisis.

As per health experts, people should maintain social distancing and other preventive measures in addition to wearing face coverings. In the latest guideline, The Ministry of Home Affairs had also made it compulsory for everyone to wear face covers at work and in public spaces at all times.