Modi was joined in by three other countries in pressing for UN Security Council reforms. 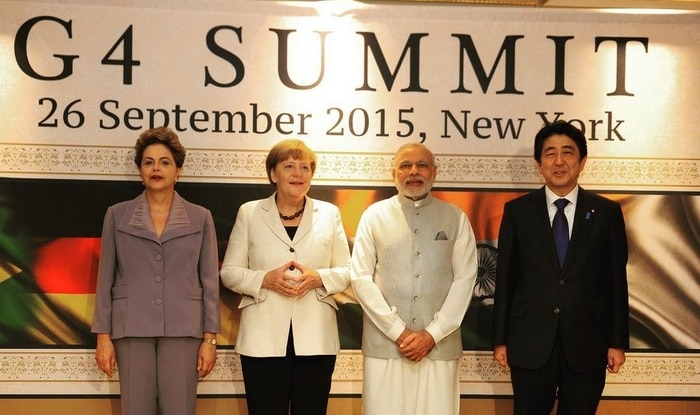 I am delighted to welcome you all. Thank you for attending this meeting early on a Saturday morning. I want to especially thank Prime Minister Abe, who has just arrived in New York. The subject of reforms in the United Nations Security Council has been the focus of global attention for decades – unfortunately, without progress so far.

Our Group of four countries, G-4, came together in 2004, bound by our shared commitment to global peace and prosperity, our faith in multilateralism and our willingness to assume our global responsibilities that the world expects from us.

I am delighted that we are meeting again as Heads of Government after ten years. (ALSO SEE: Narendra Modi cheered by Indian community at reception in Dublin, Ireland: Watch full speech video)

As I had reflected in my letter on the 70th anniversary of the United Nations, we live in a fundamentally different world from the time the UN was born. The number of Member States has grown four-fold. Threats to peace and security have become more complex, unpredictable and undefined. In many ways, our lives are becoming globalized, but fault-lines around our identities are growing.

We live in a digital age. The global economy is changed, with new engines of growth, more widely dispersed economic power and widening wealth gap.

Trends in demography, urbanization and migrations are posing new challenges. Climate change and terrorism are new concerns. Cyber and Space are entirely new frontiers of opportunities and challenges.

Yet, our institutions, approaches, and often mindsets, reflect the wisdom of the century we have left behind, not the century we live in. This is especially true of the United Nations Security Council.

The reform of the Security Council within a fixed time frame has become an urgent and important task. The Security Council must include the world’s largest democracies, major locomotives of the global economy, and voices from all the major continents. It will carry greater credibility and legitimacy and will be more representative and effective in addressing the challenges of the 21st century.

After decades, we finally see some movement. The 69th Session of the General Assembly has taken a significant step forward to commence text-based negotiations. This would not have been possible but for the dynamic leadership of H.E. Mr. Sam Kutesa and Ambassador Courtney Rattray.

However, this is just the first step. We should aim to take this process to its logical conclusion during the 70th session. I am confident that our meeting today will give a big impetus to our efforts in this direction.”