The university administration has said that Midhan who is a student of the Department of Agriculture took the step after he was suspended along with 10 other students after they got involved in a fight between two groups inside the university premises.

New Delhi: In a first-of-its-kind incident, a student of Punjab’s Guru Kashi University has attempted to take his own life by jumping off the fourth floor of the university’s building. However, thanks to the almighty that the boy has survived the fall with minor injuries and is admitted at a hospital. Meanwhile, a video of the student jumping off the building has gone viral on social media and is being shared widely. Also Read - HIS vs BAR Dream11 Team Predictions And Tips ECS T10 - Barcelona: Check Captain, Vice-Captain And Fantasy XI For Hira Sabadell vs Barna Royals Match 108 at Montjuic Olympic Ground March 9 Tuesday 5:00 PM IST

A mattress was laid on the ground, which saved the boy’s life and at present his condition is out of danger. His family as well as police has been informed about this. Also Read - India Women vs South Africa Women Live Cricket Score 2nd ODI: Mandhana, Raut Stead IND-W After Early Jolt

As per a Dainik Bhaskar report, the student named Midhan S who originally hails from Kerala attempted the extreme step after being suspended for a year by the university management after he asked for few days of leave. Police said that Midhan wrote a note before attempting to end his life in which he has accused the university management for his decision to commit suicide. According to the suicide note, he lives with his mother. He wanted leave for some reason, but the university management did not give him leave. The youth has alleged that he was suspended for a year instead of his leave being approved. Also Read - Meghan Markle, Prince Harry Share Adorable Photo With Archie; Don't Miss The Baby Bump 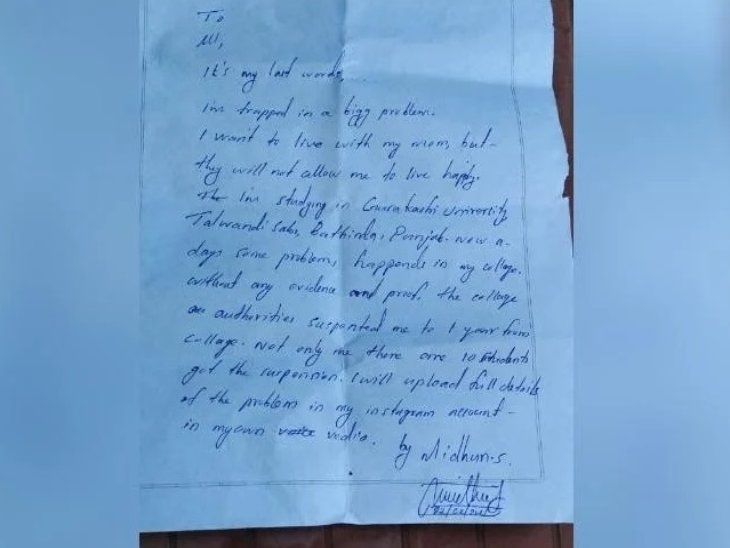 Midhan mentioned in his note that his as the administration has suspended him for a year his future has become bleak. He wrote that if he does not come to college for a year, he would not be allowed to sit for examinations either and the management has also not given a reason for suspension. Unhappy with this, he tried to commit suicide.

However, on the other hand, the university administration has said that Midhan who is a student of the Department of Agriculture took the step after he was suspended along with 10 other students after they got involved in a fight between two groups inside the university premises.

The university’s Registrar Professor PS Aulakh said that Midhan has done all this to put pressure on the management.