Directed by Rahul Dholakia, the movie faces threats of being made available for free download and online watch, on the social media platforms like Facebook, YouTube and also on the blocked torrent sites in India, just like Aamir Khan-starrer Dangal or Vijay-starrer Bairavaa.

Bollywood superstar Shah Rukh Khan-starrer Raees has opened to packed theatres on January 25. The audiences have given big thumbs up to King Khan’s Raees directed by Rahul Dholakia on the box office. But one thing that might dent Shah Rukh Khan’s Raees’ Box Office Collection apart from Raees vs Kaabil war is the threat of online piracy. The search engine giant, Google is flooded with Raees full movie free download, Raees full movie, Raees movie watch online free, watch Raees full movie online, Watch Raees full movie online free, Raees full movie online watch, and so many more even before its release date, January 25. So far, Raees which clashed with Hrithik Roshan-starrer Kaabil is clearly in sync with the positive box office prediction. Shah Rukh Khan does not shy away from taking the competition head on but tackling online piracy and movie leak scenario looks a difficult task for even King Khan. Raees, being an A-list superstar’s movie is under immense threat of getting the film leaked online like Aamir Khan’s Dangal and Vijay’s Bairavaa. The wrath of online piracy is so severe that full movie video is made available for free download and online watch, on the social media platforms like Facebook, YouTube and also on the blocked torrent sites in India. Kaabil full movie free download online: Piracy & Raees kick Hrithik Roshan’s movie out of Box office collections’ race!Also Read - Shah Rukh Khan Says ‘Ye Bandhan Abhi Bhi Pyaar Ka Bandhan Hai’ to Salman Khan For SiwaySRK Ads

There are already cheap attempts targeting Shah Rukh Khan’s Raees by leaking the plot of movie. Yes, the climax of Raees is said to be indirectly revealed on Twitter by a notorious self-claimed actor-movie critic, Kamaal R Khan. Raees is an ambitious project of Shah Rukh Khan with the superstar hoping for its success especially after his pet project, Fan (2016 film) tanked on the Box Office. Directed by Rahul Dholakia, Raees is seen as Shah Rukh Khan’s trump card in reclaiming the throne in Bollywood. He is joined in by a dazzling star cast comprising of Nawazuddin Siddiqui, Mahira Khan and Sunny Leone. The movie has everything to be a grand success only if it survives the nefarious online pirates. Also Read - Shah Rukh Khan Reveals That He 'Needs To Take Dance Lessons' From Gauri Khan's Mother

When Shah Rukh Khan announced Raees’ box office clash with Hrithik Roshan’s Kaabil, it cemented the actor’s fearless side, once again. But the movie leaked online scare can prove to be a deciding factor in Raees vs Kaabil battle. One look at the search, there is a plethora of websites claiming to provide links to watch Raees online for free. There are several options made available for free download of Raees apart from online watch. The reason online piracy continues to thrive is that of viewers who refuse to understand its repercussions on the film industry. Also Read - Thalapathy Vijay-Shah Rukh Khan To Share Screen Space in Atlee's Pan-Indian Film? 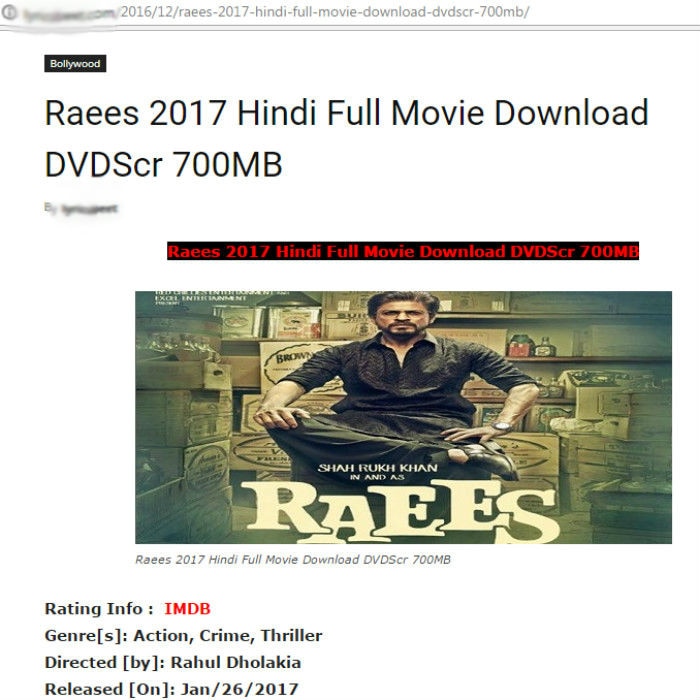 Earlier, Aamir Khan-starrer Dangal became a notable target of online piracy. The sports biopic which owns almost ever record on the box office faced troubles early on with the full movie video was leaked online by a notorious Facebook user. A day after its release date on December 23, Dangal was made available for free download as well as online watch on Facebook, till it was flagged for the copyright issues. Aamir Khan faced further setback when full movie was leaked on YouTube, and the final nail was hit when torrent sites, which ironically are blocked in India had the pirated version of Dangal for download and online watch options. 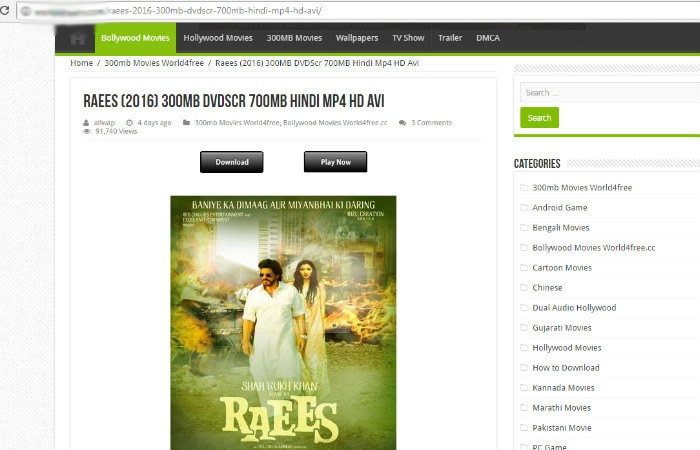 The latest victim of online piracy was South superstar Vijay when his much-anticipated Vijay 60th or Bairavaa was targeted. Vijay’s film Bairavaa, over the course of production and post-production, faced the threat of movie being leaked on the social media. While no definite steps are taken to thwart online piracy, it will be a tough challenge for Shah Rukh Khan to contain the miscreants attempt to leak Raees online for download or free watching. One rogue link made available for Raees movie can seriously cause massive damage to Shah Rukh Khan’s ambition to rule the Box Office, again. (Main Picture Credits: Raees Official Facebook Page).