Rahul Gandhi to be part of Fifty Shades of Grey! 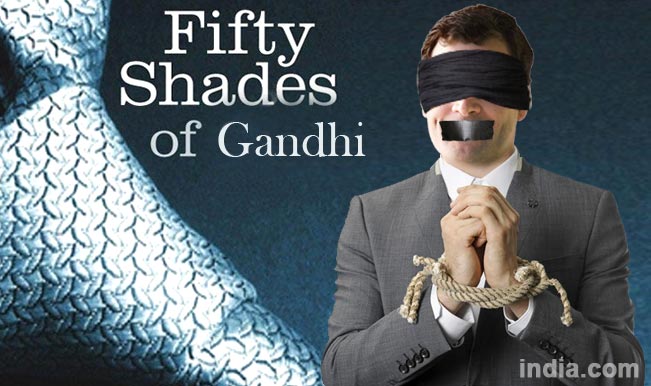 While we had earlier thought that his nature profession would be a stand-up comedian or a professional cannabis reviewer, we think that Rahul would be at home in the world of adult entertainment. A recently released picture saw RaGa put a gag over his mouth. Serious political analysts claimed it was to protest Sadhvi Niranjan Jyoti’s remarks. He said: ‘The democratic process is being subverted. The basis on which this government is functioning, we are not being allowed to speak,’ Rahul said, adding, ‘We will fight it to every inch.’ Yeah right, we believe that he came up with that himself! Also Read - Video: No More Infighting, Congress Netas in Bihar Go For Open Fight

Other commentators thought this was just the manifestation of a long-held Congress dream, to see Rahul Gandhi gagged and not be able to say anything. But we’ve been assured that both views are erroneous. The gag is neither a protest, nor is it a demand from other Congress leaders; it’s just a job audition. Also Read - Congress Forms 4-Member Committee In Bengal to Hold Talks With Left Parties, Seat Sharing; Joint Events on Agenda

The insider ads that Rahul Gandhi is so enthusiastic about the whole thing that he thinks with proper training he can take over from Manmohan Singh who also a big fan of role-playing and has been doing it for 10 years! Rahul in fact hopes to make it big and is trying to convince producers to make a desi version of EL James’ 50 Shades of Grey called the 50 Shades of Gandhi!

Disclaimer: This is a spoof article. We have no clue about Rahul’s sexual preferences.