It is the battle of the two unbeaten team in the tournament and one will end up on the losing side, which means one unbeaten streak is going to come to an end today. 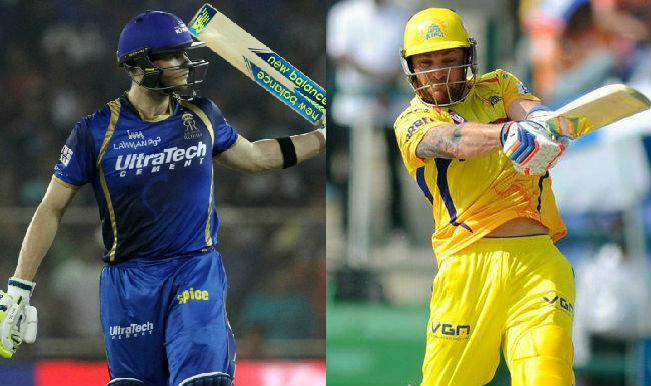 Rajasthan Royals will take on the Chennai Super Kings with both the sides looking unstoppable in the IPL 2015 so far. Super kings have literally steamrolled through their opponents on the power of their steady bowling and some dazzling batting from their openers. Royals on the other hand have depended on their Indian contingency and their captain Steve Smith to lead them to four straight victories. It is the battle of the two unbeaten team in the tournament and one will end up on the losing side, which means one unbeaten streak is going to come to an end today. Here we take a look at some of the top players in this game. Also Read - MS Dhoni Gets Slammed For Not Coming up The Order And Negative Mindset During RR vs CSK Dream11 IPL Match in Sharjah

Steve Smith (Rajasthan Royals): Smith has arguably been the best batsmen in the world in the last year or so. He has scored runs and hundreds like it’s his daily morning walk, with utmost ease and simplicity. He is already in the run for the orange cup this season and has led his team to victory with his unhindered captaincy. His team will once again be dependent on him to achieve the success that they have got used to this year. Also Read - Rajasthan Royals vs Chennai Super Kings Match 4 Highlights: Steve Smith, Rahul Tewatia Star as Royals Beat Dhoni's CSK by 16 Runs

Sanju Samson (Rajasthan Royals): The young Indian keeper has yet not performed the way we all have seen him perform. He looks calm and composed in the most difficult of the situation, the only problem being that luck hasn’t been on his side so far. With a strong technique and a fluency that is pleasing to the eye, Samson is a strong contender to replace Dhoni in the Indian team. Rajasthan will hope for him to come good in this all important match.

Deepak Hooda (Rajasthan Royals): The 19 year old has impressed one and all this year. He has been one of the reasons why Rajasthan have been able to get over the line in some of their matches. With a fearless approach and power that even the most established batsmen in world cricket would be proud of, Hooda seems like a future Indian prospect. Moreover, he can also bowl some witty off spinners to help his team in times of trouble, definitely a player to look forward to.

Brendon McCullum (Chennai Super Kings): What can one say about the destructiveness that this Kiwi possesses. He has been absolutely unstoppable so far this year. If Smith is arguably the best batsmen of the past year in International cricket, McCullum is one of the few batsmen who will be a part of that argument. With a hundred and a blazing 40 under his wings this season, the Rajasthan Royals bowlers will have to find a way to see the back of this veteran marauder.

Ashish Nehra (Chennai Super Kings): No, your eyes are not deceiving you. Mr. Nehra has been the best opening bowler this season in the IPL, with the only competition being Sandeep Sharma from Kings XI. He has picked up wickets up front and has already won 2 man of the match awards in three games. He has been quick and has made the ball move in the air, reminding us of what he can do when he is at his best, even at the age of 36. Batsmen in the royals camp will have to be aware of him and think of a way to get past his spell. Check Out: IPL 2015 Schedule – All Match Fixtures and Complete Time Table of IPL. Written by Abhimanyu Shahi.