A group of around 35 people of Rajasthan's Pali village, situated in Jamavaramgarh tehsil, took part in the effort.

With summer in its zenith in India amid the corona induced lockdown that has seen a number of wild animals making their ways to cities and villages unaccustomed to the sudden absence of humans on roads, a group of villagers in Rajasthan took it as a lesson and have prepared to avoid any man-animal face-off in these trying times.Also Read - Warning! Do Not Try This at Home: Netizens Left Shocked as Man Casually Gives King Cobra a Bath

A group of around 35 people of Rajasthan’s Pali village, situated in Jamavaramgarh tehsil, dug up a water reservoir on a hill to ensure all the wild animals roaming thirsty don’t have to sneak into the peripheral villages to quench their thirst. Also Read - Onlookers Horrified as Drunk Man Tries to Drown Bear in Warsaw Zoo After Entering Its Enclosure

The idea took shape under the guidance of one Vikram Singh Gujjar, who is a school teacher in this village. Also Read - Instant Karma! Video Showing Buffalo Dislodging Men From Cart For Making it Race Goes Viral

Vikram Singh Gurjar told IANS, “My younger brother Hansraj Gujjar has planted a few trees near the hill and used to visit the place to water the trees regularly. One fine day, he along with his cousin, Aman Gujjar went on the hillock and had an idea that if a reservoir could be made on the hill, it can be of great help to the wild animals visiting our villages frequently.”

Hansraj came home and shared the idea with Vikram who chalked out a strategy to get the idea going.

Soon, the two of them, Hansraj and Aman went with the necessary tools to find a suitable place on the hill and started digging the place.

Looking at their endeavour, other youths from the area too started chipping in and the number grew to 35.

Meanwhile, all of them followed guidelines of social distancing and covered their face with cotton cloth during their work, said Vikram adding that since last many years, the villagers were watching wild animals entering their villages during the summer to quench their thirst which often caused panic in the villages. 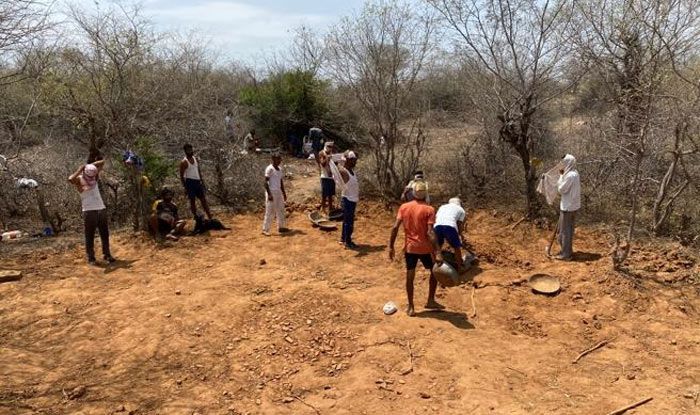 Also, as the Jamwa Ramgarh wildlife sanctuary is situated close to this place, there was a regular threat to villagers with many animals visiting frequently in search of water.

The idea of the two soon turned into a silent movement in the village.

Vikram said that the during the lockdown the youths had no work in their hands. The idea, instantly was a hit with them and thus the group worked together for a noble cause. Many of the group members were students, others farmers and a few had returned home from other places during lockdown, he added.

It took around 35 days to make a water reservoir ready in the Pali Village, he informed further.

The water reservoir will get filled with water during rainy days, thereby helping the wild animals.

“The reservoir is ready, and now they all are hoping it to get filled during the forthcoming days. However, stones around the reservoir need to be fixed up. It will be of great help if the forest department or any other department can come in to help us,” said Vikram.

“Our boys had started the work in March end and it started progressing in April and is now complete in May. However, some helping hand is required to bring in some big stones to cover the pond around,” he added.