Ramayan's Ravan Aka Arvind Trivedi Makes His Debut on Twitter, Netizens Welcome Him With Open Arms.

Veteran actor Arvind Trivedi, who played the iconic character of Ravan in the mythological show Ramayan, has now made his debut on Twitter and fans have welcomed him with open arms. His Twitter bio reads ‘Worked in more than 350 films and played role of Ravan in Ramayan with blessings of Shri Ram. Former MP in 10th Loksabaha. Jai Siyaram.’Also Read - Ramayan's Lakshman Aka Sunil Lahri Watches 'Meghnath Vadh', Netizen Advises Him to Not Sit Close to TV Screen

The twitterati has flooded the social media with the screen grabs from the show and feel happy to have him on the micro-blogging site. They even trended the hashtag #RavanOnTwitter. Also Read - Ramanand Sagar’s Ramayan Breaks Another Record, Gets Highest-Ever TRP in Week 4 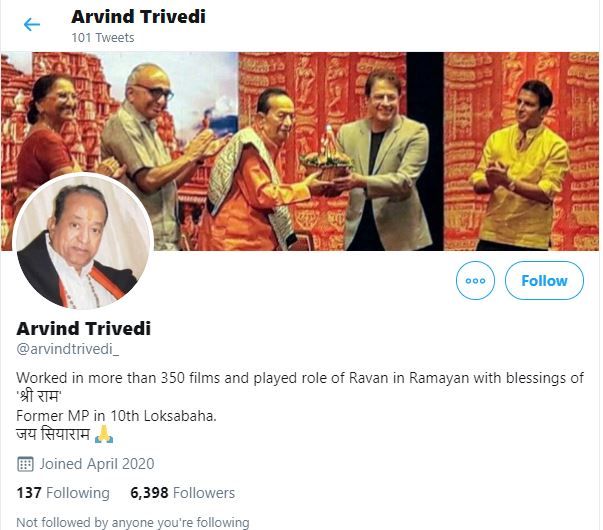 One more user tweeed, “#RavanOnTwitter After getting to know that RAVAN has recently joined Twitter SRI LANKANS.”

I will stan Lakshman for the rest of my life! The way he stood up for right, questioned his brother about his behaviour towards his bhabhi, was so emotional. And the way @LahriSunil sir expressed every emotion of Lakshman, it is all praiseworthy 😭😭😭#Ramayana #RavanOnTwitter pic.twitter.com/o2RcJeZfcN

#RavanOnTwitter. We’re glad to you. Such a great personality. pic.twitter.com/Mk91nXC5RU

#RavanOnTwitter
After getting to know that RAVAN has recently joined Twitter
SRI LANKANS :- pic.twitter.com/98dyOaZJ5s

The Raval got killed, now who will kill the real Ravan who is defaming this nation n doing Anti national activities. Who want to break nation.

After watching Arun Trivedi ji in real life joining hands in front of TV it becomes difficult to hate Ravan’s character. He is true devotee of Ram. He deserves respect and prayers from us🙏🙏