Rani Mukerji celebrates her 38th Birthday today. Take a look at some of her best films.

Rani Mukerji celebrates her 38th birthday today on March 21, 2017. She is rightly called the ‘queen of hearts’ and was one of the biggest stars and one of the biggest actors in Bollywood some time back. Many believe that it was Vidya Balan who started the trend of female centric movies in the recent years but actually it was Rani Mukerji who started the ball rolling with her debut movie itself. Her debut movie ‘Raja Ki Aayegi Baraat’ was based on a rape victim who braves the society’s backlash and fights against the crime. The movie was a tough choice for a newbie as it did not have any established hero as the main lead nor was the subject matter superfluous or happy-go-lucky but Rani Mukerji aced the hard-hitting role. She followed it up with an equally serious role in ‘Mehendi’ which dealt with dowry and the ill-treatment meted out to daughters-in-law. Her movie choices have always been unconventional and noteworthy and that is what makes her the Bollywood’s original Mardaani. Also Read - Karan Johar Reaches Alibaug to Bless His Student Varun Dhawan And Natasha Dalal, See Pics

Rani Mukerji proved at a young age and very early on in her career that she is the real queen of the box office and of the audience’s heart. She was the only other actress who could stand-up to the stardom of Shah Rukh Khan and Kajol when they were the biggest stars in Bollywood. Whether her movies achieve success at box office or comes a cropper, her performance is always applauded. She has time and again tried to break the stereotypes and shackles associated with the typical Hindi movie heroine. Rani Mukerji’s career choices are no less than an inspiration on which a young actress can base her career on. Also Read - Varun Dhawan-Natasha Dalal Wedding LIVE From Alibaug: Karan Johar Leaves, Team 'Humpty' Spotted

On her birthday today, we take a look at seven of her films that made Rani Mukerji an ace actor and fearless performer: Also Read - Bigg Boss 14 Weekend Ka Vaar With Salman Khan Won't Happen as Actor Attends Varun Dhawan-Natasha Dalal's Wedding

1.Raja Ki Aayegi Baraat
Raja Ki Aayegi Baraat was Rani Mukerji’s debut film. She plays the role of a rape victim but unlike previous portrayals in Hindi films, she does not bow down or feel herself victimized. She rises to the challenge and raises her voice against the society and against the man who violated her. Mind you, there was no established hero or bigger names associated as lead in this movie but she took it up and aced the tough role. 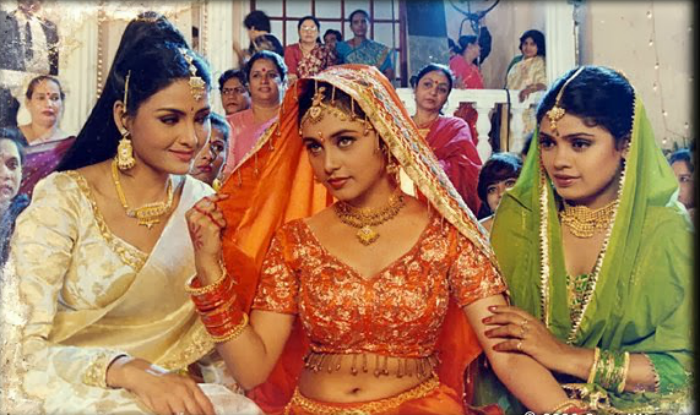 Kuch Kuch Hota Hai was again one of the biggest gambles that she took. Karan Johar was a debutant director and Dharma Productions although a well established name was not a very profitable production house. On top of it all Rani Mukerji’s character was supposed to die in the first half of the film itself. The role was rejected by most established actresses of the time and Karan Johar had almost given up on the film but then Rani Mukerji came on board and went on to win the Best Supporting Actress award. The film is a cult hit and stars Shah Rukh Khan, Kajol and Rani Mukerji in the lead roles.

Rani Mukerji essayed the role of Suhani Sharma in Saathiya which went on to become one of the most loved love stories of all time. Saathiya starred Vivek Oberoi when he was very new in the industry and brought fame and glory to the two lead actors. Saathiya also had Shah Rukh Khan and Tabu in cameo roles. Rani Mukerji played a career-oriented doctor in the movie that fights with her family to be with the one she loves. She does not succumb to the post-wedding problems that grapple every middle-class married couple and gave inspiration to millions of girls out there to not to forgo their dreams, stand by their decisions and not succumb to the pressures of a married life and running a household.

Rani Mukerji is fearless in a way that she is not scared of playing a supporting role in a film. In Veer-Zaara she is not the main lead but plays the pivotal role of bringing the film together. She plays a young Pakistani lawyer who tries her best to get an Indian Army Officer wrongly detained in Pakistan, release from prison and reunite him with his long lost love. She stars in this movie along with Shah Rukh Khan and Priety Zinta who play the title roles.

Saawariya was a debacle in every way possible, but Rani Mukerji shone through in the film. She essayed the role of a prostitute but she overshadowed everyone with her brilliant performance. Saawariya was the debut movie of Ranbir Kapoor and Sonam Kapoor and also had Salman Khan making a guest appearance. Rani Mukerji was the only saving grace of the film.

6.No One Killed Jessica

In No One Killed Jessica the screen used to lit up whenever she appeared in the frame. The song “Aali Re” was a true anthem to Rani Mukerji’s personality. She was paired opposite Vidya Balan who is a powerhouse performer in her own right but it was Rani Mukerji who shone through in the movie. Her fiery role of reporter Meera Gaiety lent teh movie the speed that it lacked prior to her appearance in the movie.

Black was undoubtedly the most difficult role ever. Based on Hellen Keller’s life Rani Mukerji essayed the role of a deaf, dumb and blind girl. Paired opposite Amitabh Bachchan she ensured that she is not judged the lesser performer and went on to receive accolades for her difficult performance. This was one of the most daring of her movie choices.

Once again Rani Mukerji was essaying a supporting role, but in Talaash her gloomy haunting eyes portraying a mother who lost her child overshadowed even Aamir Khan and Kareena Kapoor. The movie revolved around Aamir Khan and Kareena Kapoor’s character and they obviously had more screen presence but when Rani Mukerji alights in the scene she is a revelation. Her controlled grief was poignant and impactful enough to make audience feel her trauma and anguish of losing her son.

The last outing of Rani Mukerji was in Mardaani which showed her playing the role of Senior Inspector Shivani Shivaji Roy. She was unapologetic, fiery, head-strong, smart and ruthless in the movie. Her action scenes were very convincing and so was her demeanor in the movie. The symbolism that was attributed to her through this film of Rani Laxmi Bai the original ‘Mardaani’ was done justice by Rani Mukerji.

We hope that she will be gracing the silver screen again and regularly. Rani Mukerji took to Facebook yesterday on the eve of her birthday to answer some questions from her fans.

Rani Mukerji will be seen next in Hichki which will be her comeback film. Her last release was Mardaani that released two years ago. Rani Mukerji took a sabbatical after her marriage to producer/director Aditya Chopra and the birth of her daughter Adira.