Ranveer Singh takes the opportunity to laugh at himself sharing a meme on Instagram that compares his style with that of a toilet cleaner.

Actor Ranveer Singh once again took a moment out of his busy schedule to laugh at himself, or rather at his impeccable fashion choices. The actor posted a hilarious meme of himself dressed in a blue and red tracksuit. In the meme, his look has been compared with the design of a popular toilet cleaner. The bottle of toilet cleaner has blue and red in its signature look and Ranveer found it extremely funny that his style was being compared with how similar it seemed to the design of the bottle. Here’s what the actor posted: Also Read - Ranveer Singh's Diamond-Studded Wrist Watch is Super Stunning And Super Expensive - Guess The Price 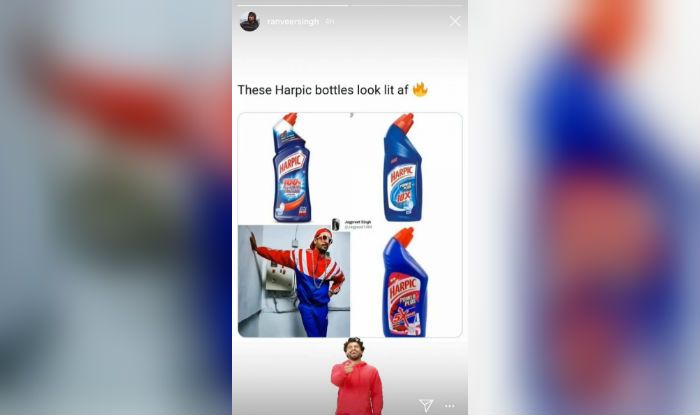 Earlier as well, he posted a meme in which the difference between his appearance when he is with Deepika Padukone and when he is spotted without her, is highlighted. Check this out: Also Read - Deepika Padukone’s Rs 12,500 Oversized Shirt Deserves a Place in Your Closet| See Viral Photos 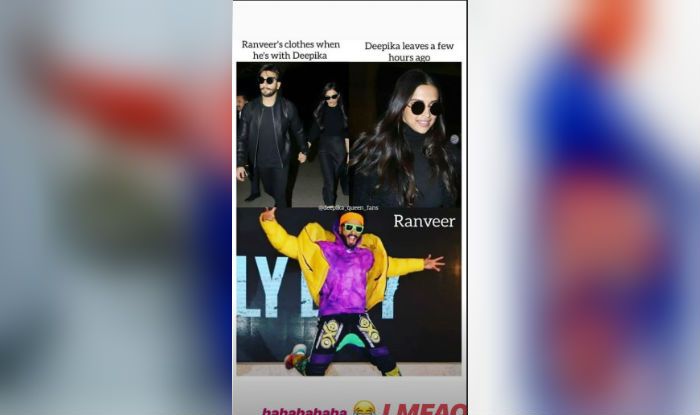 Ranveer is known to be at ease with the most bizarre looking outfits that exist. He loves to flaunt weird prints and unusual colours at events and while promoting his films. The actor once revealed that he gets his fashion inspiration from filmmaker Karan Johar who is also responsible for giving him the outfits that no one else likes to wear. During Ranveer’s latest appearance on Koffee With Karan 6, he revealed that KJo buys very expensive outfits from international brands and then gift them to him realising he himself can’t pull them off. Also Read - Ranveer Singh-Deepika Padukone's 83 Gets Release Date; April Window Cleared For Sooryavanshi?

On the work front, Ranveer is currently busy with the preparation of his next film ’83. The Kabir Khan-directorial features the actor playing the role of Indian cricketer Kapil Dev. ’83 is the story of India’s first cricket World Cup win and the cast of the film is currently training hard to step into the shoes of cricketers who were the part of the celebratory Indian squad. After this, the actor will begin shooting for Karan Johar’s Takht which is a grand Mughal drama also starring Kareena Kapoor Khan, Janhvi Kapoor, Alia Bhatt, Vicky Kaushal, Anil Kapoor and Bhumi Pednekar among others.