The all-rounder Jadeja becomes a father to a baby girl on Thursday before India and Sri Lanka clash for ICC Champions Trophy 2017.

Indian Cricketer Ravindra Jadeja is on the cloud nine and has every reason to celebrate his happiness. The all-rounder Jadeja becomes a father of a baby girl on Thursday before India and Sri Lanka clash for ICC Champions Trophy 2017. Jadeja’s wife Reeva Solanki who is a mechanical engineer delivered a baby girl, and the test bowler embraced fatherhood for the first time. But sadly, Jadeja is in England preparing to win against Sri Lanka team and secure their place in Champions Trophy semifinal.Also Read - IND vs NZ, 1st Test: Time Wasted By Umpires Might Have Robbed India a Test Win vs New Zealand, ICC Need to Rethink On Rules of the Game

Jadeja shared good news about his wife’s pregnancy in March. Ravindra and Reeva walked down the aisle on April 17 last year and had a private wedding ceremony with their family and friends by their side. Ravindra was quoted by Star Sports saying, “I had to leave my pregnant wife behind. Family matters a lot to me, but it was also necessary to be part of the team with an important match coming up against Pakistan. Since the family is there to take care of her even they felt that I should play as that’s more important and I decided to do the same.” Also Read - Day 4: Debutant Shreyas Iyer, Gritty Wriddhiman Saha Set up an Intriguing Final Day 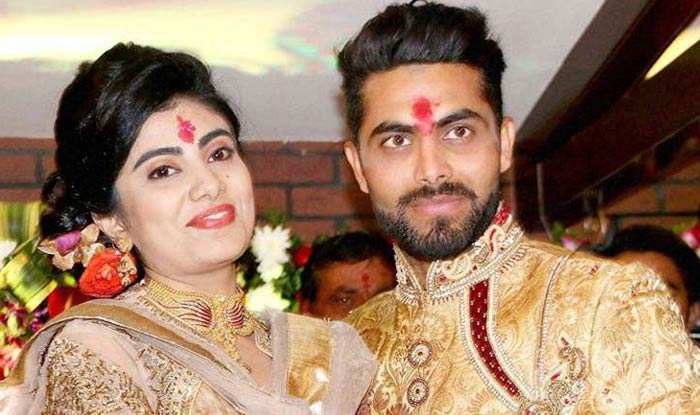 Earlier this year, Ravindra and his wife Reeva met with a minor road in Jamnagar but were unhurt. Ravindra and Reeva made headlines when the spinner received an Audi priced at 96 lakhs by his father-in-law as a gift. Indian captain MS Dhoni back in 2015 was away from his wife as he was on a national duty during the ODI World Cup when his wife Sakshi delivered the baby girl Ziva in February. Jadeja has won millions of hearts with his bowling skills and within no time, became the number one Test bowler in the world.

On 4 June 2017 India defeated his arch-rival Pakistan by 124 runs at Edgbaston. India will take on Sri Lanka on June 8 and South Africa on June 11 at Kennington Oval in London. Congratulations to the couple and we hope they post adorable pictures of their little one.