She was 59 years of age when she breathed her last at the Kokilaben Dhirubhai Ambani Hospital in Mumbai. Reema Lagoo’s funeral was held at 2 pm at Oshiwara crematorium.

The sudden death of actress Reema Lagoo left the Hindi and Marathi cinema industry in the state of shock. The veteran star who featured in numerous Bollywood films passed away on May 18, 2017, after suffering from cardiac arrest. She was 59 years of age when she breathed her last at the Kokilaben Dhirubhai Ambani Hospital in Mumbai. Reema Lagoo’s funeral was held at 2 pm at Oshiwara crematorium. Leading celebrities and senior actress’ co-stars from cinema and television industry attended the last rites to pay homage. The pictures and video of stars like Aamir Khan, Kajol, Kiran Rao, Mahesh Manjrekar were seeing mourning the loss of the veteran star. Indian Prime Minister Narendra Modi condoled the death of actress along with entire Bollywood uniting in bidding final goodbye. Reema Lagoo dies at 59: Salman Khan’s favourite on-screen mother will be remembered forever for these 5 roles!Also Read - 'Baahar Badi Star Banti Hai, Hum Dikhate Hain Isko..': Fatima Sana Shaikh Opens Up About Bullying as a Child Artist

Reema Lagoo was active in her career at the time of demise. She was seen on Star Plus daily soap Naamkarann in the role of Dayavanti Mehta. She was shooting for the show till 7.00 pm on Wednesday. But according to the reports, the senior star complained of chest pain and was rushed to Mumbai’s Kokilaben Hospital. She died of severe cardiac arrest at 3.30 am on early Thursday morning leaving her fans and followers teary-eyed. Reema Lagoo passes away at 59: Celebrities and fans remember the veteran Hindi and Marathi actress. Also Read - Breaking News LIVE: Nepal Confirms Two Cases of Omicron Variant of COVID-19

Her funeral was held at Oshiwara crematorium in Mumbai which saw a beeline of Reema Lagoo’s co-stars and close associates from the film industry in attendance. Stars such as Aamir Khan, Kiran Rao, Reena DuttaMahesh Bhatt, Barkha Bisht Sengupta, Raja Murad, Gulfam Khan, Bharati Achrekar, Vijay Gokhale and Mahesh Manjrekar were spotted paying the last respects to the lost star. There were reports of actor Salman Khan also being present at the funeral, but there is no confirmation on it yet. Reema Lagoo dies at 59: Quick facts about veteran actress who played onscreen mother to Salman Khan and Shah Rukh Khan. Also Read - Kashi Vishwanath Corridor Project: How PM Modi’s Dream Project Will Boost Religious Tourism | SEE PHOTOS 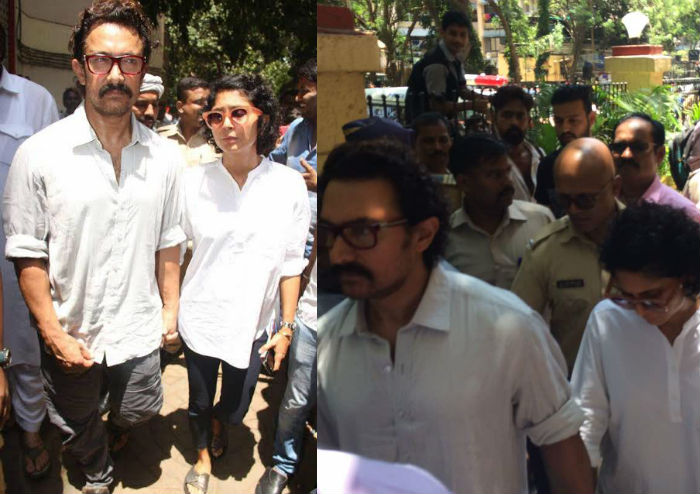 Aamir Khan was photographed with his wife Kiran Rao paying their last respects to the veteran actress. Bollywood’s Mr Perfectionist worked with Reema Lagoo in his debut film Qayamat Se Qayamat Tak. The grieving actor was quoted saying, “We all are still in shock because she didn’t have any illness that we knew of. My first film was with her she was a great actress and a pure heart.”

Kajol mourning the loss of her on-screen mother

Bollywood actress worked with Reema Lagoo in Kuch Kuch Hota Hai where the senior actress played the role of her mother. She was a crucial part in the Karan Johar’s directorial debut also starring Shah Rukh Khan and Salman Khan. 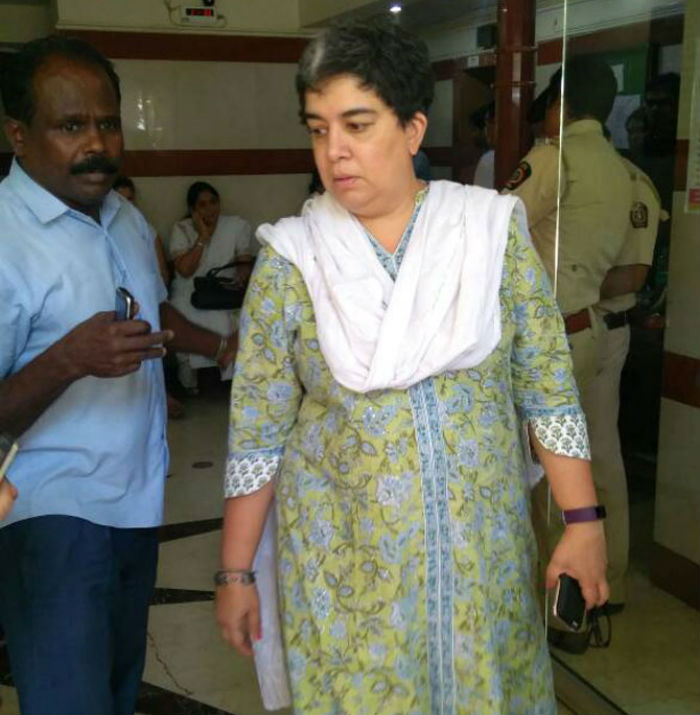 Aamir Khan’s ex-wife Reena Dutta was also among the attendees paying the last rites. She was also a part of the cult film Qayamat Se Qayamat Tak, that starred her former husband and the late senior actress. 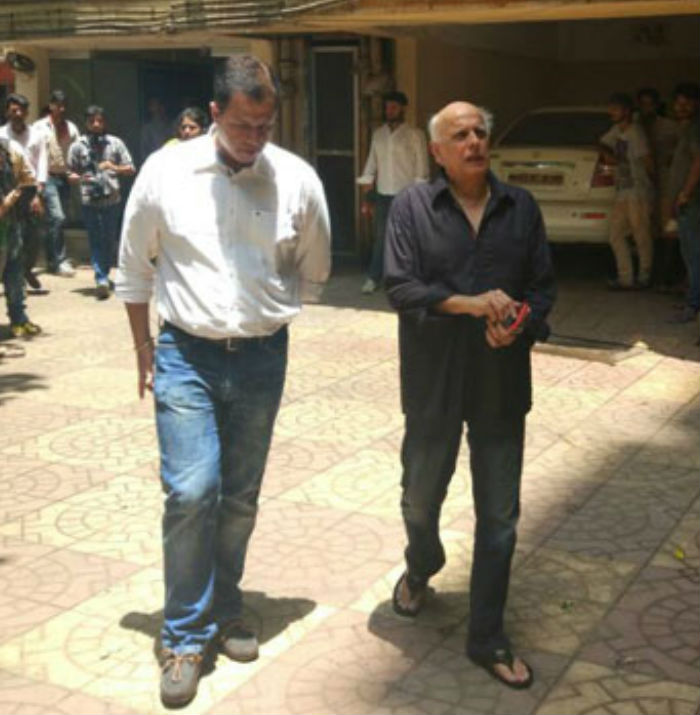 Leading Bollywood filmmaker and cinema expert Mahesh Bhatt was also among the early celebrities spotted at Reema Lagoo’s residence. He had worked with the deceased actress in films such as Aashiqui, Naajayaz and Gumrah. Reema’s last serial she was working in, Naamkaran was also produced  by Mahesh Bhatt. The renowned Indian director was saddened to not meet the actress before her death. He was quoted saying, “All I can say is that she was an extraordinary actor, undoubtedly, but she was an even better human being.” 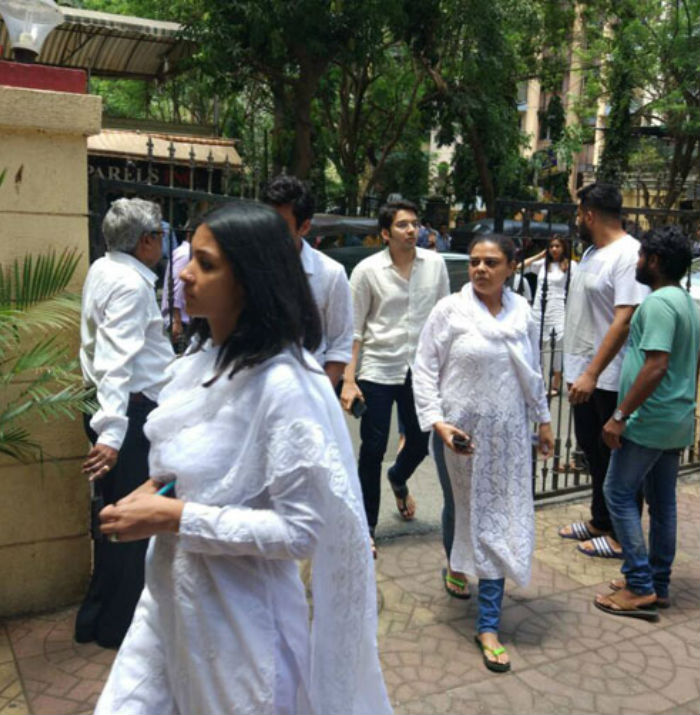 Reema Lagoo’s most recent acting venture was the ongoing serial on Star Plus, NaamKaran. Her co-stars from the show, Barkha Bisht Sengupta and Gulfam Khan were seen mourning the death of the star, who was gone too soon. Barkha played the role of Reema’s daughter-in-law who does not get acceptance in the serial inspired by Mahesh Bhatt’s movie Zakhm. Gulfam Khan played the role of Nanno/Fatima in the hit TV serial.