Finding Nemo-Toy Story fame Robb Gibbs passes away at 55, worked at the Pixar studios for 20 years as a director-story artist-writer

Coming as another loss to the entertainment industry, Rob Gibbs, who worked on films like Toy Story 2, Finding Nemo, Inside Out, Onward, Monsters, Inc. and Incredibles 2 died at the age of 55. The Pixar director, story artist and writer worked at the Pixar studios for 20 years. Also Read - Rubbing bacteria may help 'Nemo' live with anemones: Study

Gibbs was co-directing the upcoming Germany/Belgium/Canada co-production Hump, at the time of his death and had been working on pre-production of the film. Hump would have been his feature directorial debut. The man responsible for the magic that Pixar created throughout our childhood, passed away on April 28, 2020, according to the Hollywood Reporter and the cause of his death and other details are unknown. Also Read - Centre, not TN govt, can tackle escalating fuel prices: Palaniswami

Talking about his upcoming directorial, Hump tells the story of the camel Rami who undertakes a journey across the Arabian Desert to reunite with his owner and best friend, Omar, a 10-year-old Bedouin boy. The producers of the film shared some of his pictures along with a message of condolence on Facebook. It read, “Our hearts broke this morning when we learned of the sudden passing of Rob Gibbs, co-director on our animated film HUMP. We’ve not only lost a creative partner, but also a wonderful human being, always in a good mood and never short of a joke that made it a joy to work with him over the past few years. Before we met Rob, he already looked back at an impressive career at Disney and Pixar, a veteran story artist on classics like Toy Story 2, Monsters Inc., Finding Nemo, or Inside Out, he directed many of the Pixar shorts in the Cars franchise and kept entertaining us with his anecdotal stories from his many years in the industry. He loved spending time with his daughter, and he loved old classic cars and zombie stories. You’ll be dearly missed, Rob. Alex, Esther, Tom and all of us at MovieBrats Pictures #RobGibbs (sic).” Also Read - How Nemo got his stripes decoded 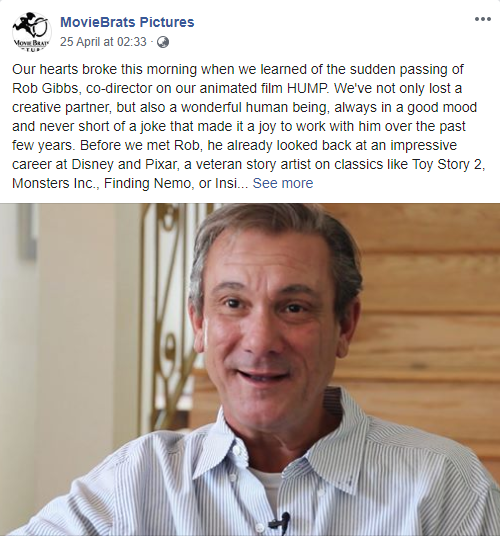 His daughter Mary was the voice of Boo in several Monsters, Inc. projects. Gibbs’ also has the short film Tokyo Mater (2008), the series Mater’s Tall Tales and Tales From Radiator Springs, all emanating from the Cars franchise, Brave (2012), Monsters University (2013), Incredibles 2 (2018) and the upcoming Monsters at Work series for Disney+ to his credit.