Internet’s obsession with killing British comic actor, Rowan Atkinson aka beloved Mr. Bean is driving his fans crazy. For the nth time, the 62-year-old has fallen prey to malicious death hoax posts on the social media. His die-hard fans were jolted after coming across fake news headlines reading – Rowan Atkinson Dead. False death reports have targeted many celebrities such as Amitabh Bachchan, Johnny Depp, Miley Cyrus and others but it is heartbreaking as Rowan Atkinson has become a death hoax victim multiple times. On the latest occasion, news of comedian-actor passing away was supposedly published on Fox News, and it quickly spread like wildfire. Rowan Atkinson dead: Comedian Mr Bean falls victim to internet death hoax.Also Read - Rowan Atkinson Dead, this time in a car crash? Mr Bean actor's death hoax goes viral on Twitter

Rowan Atkinson fans came across a shocking news piece related to their favourite actor. With headlines reading, ‘Rowan Atkinson Dead’ by a post from US broadcaster Fox News, it contains a photo of the actor along with text reading, ‘R.I.P 1955-2017 Mr. Bean Rowan Atkinson’ along with a play button icon. Part of the click-bait news reads – “FOX BREAKING NEWS: Mr. Bean (Rowan Atkinson) died at 62 after crashing his car on attempt perfecting a stunt – Today July, 2017”. This is a fake post to make the readers fall for clicking the post. Also Read - Adam Sandler is not DEAD! Falls prey to Internet's list of death hoaxes

According to the hoax-slayer.net, “If you click on the post, you will be taken to a website that appears to host the video about Mr Bean’s demise. But, when you attempt to play the video, you will see a message claiming that you must complete a security check and share on Facebook to continue watching. A Facebook share box will appear in a new browser tab. You will be prompted to share the fake “Breaking News” post on your Timeline. At the same time, the original page will be automatically redirected to a scam or malware website. The exact destination of this redirect may vary.” Also Read - Rowan Atkinson dead: Comedian Mr Bean falls victim to internet death hoax 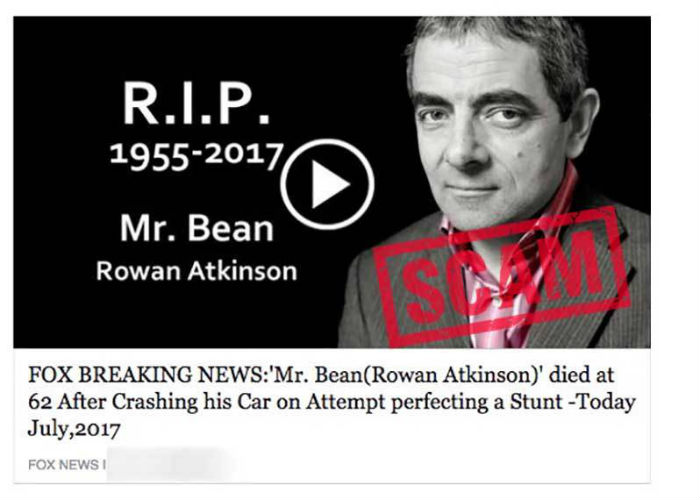 It is not the first time the Rowan Atkinson has become the target of fake death news. In July 2016, it was falsely reported that he has taken his own life after “battling severe depression”. The news has got his fans emotional and mourning the death of their favourite actor. In fact earlier this year, there were reports of Mr. Bean killed in a car accident. Well, it is high time internet stopped with Rowan Atkinson Death Hoax!