Prime Minister Narendra Modi is going to address the country on January 2 in a Rally for the Uttar Pradesh Elections. The viral WhatsApp forward has led to people highly anticipating PM Modi to unveil the new Rs 1000 currency note in his announcement.

Indian Prime Minister Narendra Modi will be addressing the masses in the New Year on January 2, 2016 in a rally in Uttar Pradesh as a part of BJP campaign for 2017 Uttar Pradesh Elections. According to a report in the Economic times, PM Modi is all set to make a policy amendment as the 50-day trial period of demonetization has come to an end. Ever since this news has been revealed a WhatsApp message with a counterfeit picture of new 1000 rupee notes has gone viral. Sources are saying that Modi’s big announcement in the rally will be the launch of the new 1000 rupee currency note. But the viral image on WhatsApp is claiming the new forged 1000 rupees bank note to be already available in the bank from January 1. The 1000 rupee note which is taking the messaging app by storm is clearly a work of fiction. It is a fake currency as one can notice the discrepancy in the note, with the words ‘Two Thousand Rupees’ written above the Mahatama Gandhi image along with the denomination being shown as ‘1000’ in numbers.  ALSO READ: Rs 1000 new note specimen picture is viral: Is this how the new currency note looks like?Also Read - Stop Flights From Regions Witnessing New Omicron Variant: Kejriwal Urges PM Modi

The picture which is circulating on WhatsApp has an image of five notes which were held out, and a set of rules were written below. The rules according to the viral WhatsApp message read “From 1st January 2017, New Rs. 1000 notes will come. Rs 2000 notes to be returned to the bank. Max deposit allowed 50k(50000) only. This is allowed for 10 days only. Afterwards Rs. 2000 notes not valid. Don’t keep more 2000 notes.” This message along with picture is smartly created in line with the idea that the mind behind demonetisation, Anil Bokil. The social activist recently said that the Rs. 2000 notes were to be withdrawn soon as it was a stopgap arrangement. Also Read - Planning Lockdown, Urging Flight Ban And Scaling up Testing: How Are Indian States Preparing to Combat Omicron

The rally PM Narendra Modi will be addressing in Uttar Pradesh is a part of Bharatiya Janata Party’s campaign for the Uttar Pradesh elections. The UP elections have been the centre of the action with the elections date fast approaching. The Prime Minister led, Bharatiya Janata Party, have been addressing rallies and making an impact. Also Read - #UPSCExtraAttempt: Why Are Civil Service Aspirants Demanding Another Chance? 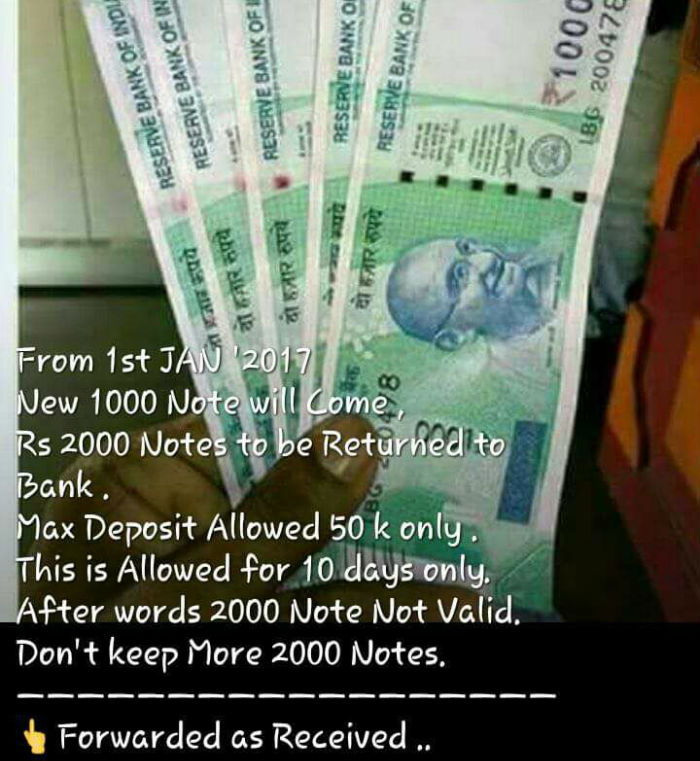 This new announcement, which we hope is the unveiling of the new Rs. 1000 notes have been anticipated by the Indian citizens for quite some time. Ever since the Prime Minister announced the ban of Rs. 500 and Rs. 1000 notes, on November 8, 2016, the nation has been in a state of chaos. The Prime Minister had promised to bring things back to normalcy by December 30 while addressing a rally in Goa. As the date has been nearing, critics have taken it upon themselves to unleash at the Modi-led government as the state of affairs are not improving.

While the authenticity of the message is still in question, it does bring in a lot of fear as people are dreading standing in long serpentine queues once again. This move, if made will actually be genius at work since most of the fake notes and large amounts of money detected all over India were in the denomination of Rs. 2000. The entry of Rs. 1000 notes into the note circulation will play a fundamental role in bringing back normalcy in the Indian household.