BJP President Amit Shah addressed a rally at Karnal, Haryana to highlight numerous achievements of the ruling Modi government on successful anniversary at the centre. 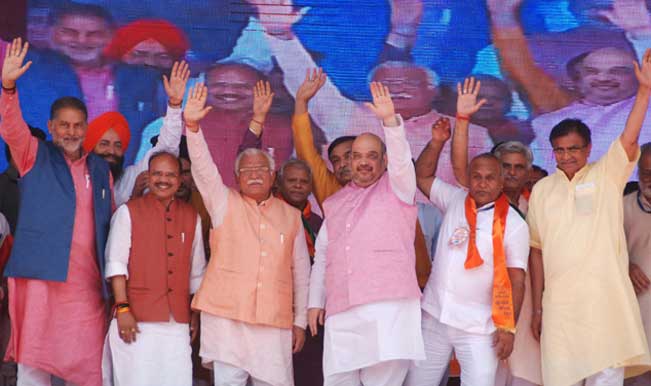 It’s been one year since the Bharatiya Janata Party-led National Democratic Alliance (NDA) Government came to power with Narendra Modi heading the Cabinet. Soon after the former Gujarat Chief Minister took over the Prime Minister’s office, the BJP rose to power at state level in Haryana and Maharashtra.  After Rajnath Singh acquired the Home Ministry’s office, Amit Shah took over as the National President of the BJP. Also Read - Budget 2021: Will Govt Bring Cheer to Pandemic-hit Middle Class? A Look at Expectations This Year

As the NaMo government completes one year at the centre, Amit Shah embarked on a three-day trip to address rallies and press conferences in three states. The 50-year-old’s day commenced with a press meeting at the party’s headquarters at the Ashoka Road in New Delhi, where he strongly stated that the ruling party has restored pride of the Prime Minister’s office. Narendra Modi sends message to followers; #SaalEkShuruaatAnek top trending topic on Twitter. Also Read - India vs Australia: PM Narendra Modi, Sachin Tendulkar Congratulate Team India After Historic Win; Fans on Twitter Go Berserk

Shah then rushed to the neighbouring state of Haryana to address a rally in Karnal. After the formal inaugural welcome, he proceeded to stress on how the BJP have shown accountability. He also credited the people of Haryana for electing a BJP candidate in all eight seats during the historic Lok Sabha elections held last year. Amit Shah’s next public appearance will be at the Neelgiri Ground Limbayat, Surat before which he will address a press conference at the Circuit House on Wednesday. His will then zoom to Goa where he will follow a similar schedule of appearing at a press conference and then a rally at Panjim.

Watch the full video to find out what he had to say.