Salman Khan unleashed his true bhai (read: brotherly) streak at sister Arpita Khan's much-talked about grand wedding. Yes, the 48-year-old actor let his hair down and had a wonderful time at the do. H 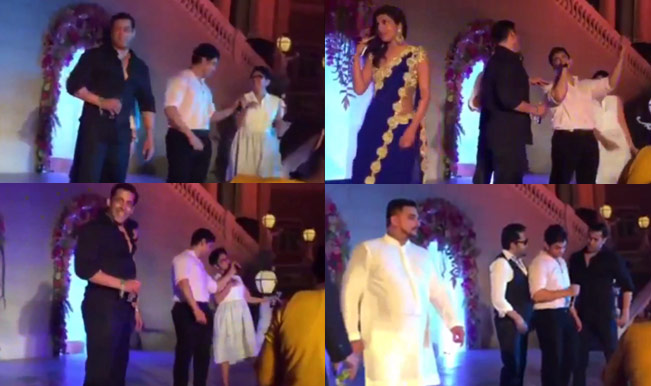 Salman Khan unleashed his true bhai (read: brotherly) streak at sister Arpita Khan’s much-talked about grand wedding. Yes, the 48-year-old actor let his hair down and had a wonderful time at the do. He even surprised us by pulling off THE moment at the sangeet ceremony. Sallu miyaan invited Aamir Khan on the stage for a special performance. The bonsai stud then happily obliged and started signing his popular song from the movie Ghulam. Dressed in a crisp white shirt and black trousers Aamir was beaming with energy at the do that was celebrated with much pomp and Bollywood tadka. He instantly grabbed the microphone and started crooning Aati Kya Khandala …number to draw loud cheers from the audiences. Salman who was looking more relaxed than ever before ( it goes without mentioning that bhai had a mandatory glass of white something that must have put him at ease) as she started shaking his booty to Aamir’s singing. Aamir gave the singing sensation Mika a run for his money with his singing style. Soon wifey Kiran Rao too joined him and together the lovely pair shook their starry legs. Salman though enjoyed the whole act with his trademark bhaigiri. Take a look! Also Read - Bigg Boss 14 October 21 Episode Major Highlights: Captaincy Task Breaks Friendships in The House