One of the controversial actresses in the television industry Sara Khan is yet again making headlines for a bold music video. The ex-Bigg Boss contestant is currently shooting a song video with her co-star Angad Hasija. They were seen together in Sapna Babul ka Bidaai, Ram Milaayi Jodi and Saubhagyalaxmi. This music video is not like any other song as the makers assure that it will raise a lot of eyebrows and it’s content will create controversies. But who cares, Sara knows how to deal with trolls. She seems to be loving all these controversies that surround her when she posts her bikini pictures online. Also Read - Sara Khan Talks About New Song Shukran And Who She Wants to Spend COVID-19 Lockdown With

Sara Khan was recently trolled badly for posting a bikini pool picture online. Not only her current BTS video is going viral, also a new picture of hers is creating a buzz over the internet. Her sleazy two-piece bikini has caught everyone’s attention. She captions the picture as, “Parde mei Rehnne do parda na uthao Parda jo uth gaya toh, Allah meri taubaaaaaa.” And just like before, her own fans are against her. One of the comments say, “Mad or what , what u r trying to show to public , burqa pehenti nhi ho to at least burqe ki to izzat karo … shame on u dear .. i was your fan but after this post , u r not deserving any praise at least from my side”. Also Read - Bigg Boss 4 Contestant Sara Khan Trolled For 'Lip Job Gone Wrong', Actress Hits Back Saying 'It's Just a Filler'

Sara Khan even mentioned that a new video is coming up. So here is the BTS video which you should not miss. Also Read - Former Bigg Boss Contestant And TV Actress Sara Khan Says She Turned to Singing to Promote Happiness

Here is another one with co-star Angad Hasija: 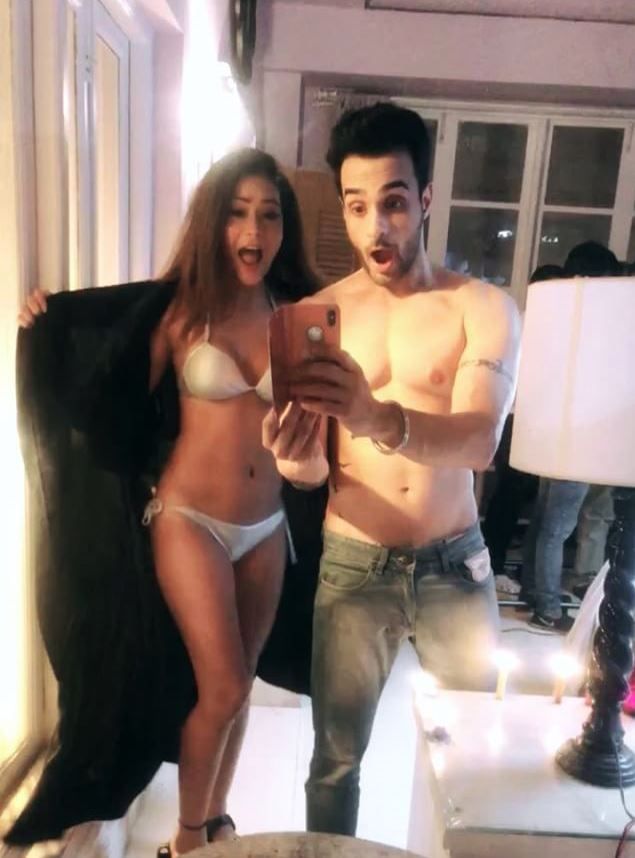 It is not for the first time that Sara has created a social media frenzy by posting bold pics of herself. Last month also she posted a bikini picture from a holiday in Goa. She was trolled mercilessly for the same.