In a recent controversy, Sara's sister Ayra put nude pictures of her on Instagram while they were holidaying in Sri Lanka.

Former Bigg Boss 4 contestant and Indian television actress Sara Khan is on a summer vacation with friends and family in Goa. She was seen letting her hair down and taking pictures while having fun in the water. Also Read - Sara Khan Talks About New Song Shukran And Who She Wants to Spend COVID-19 Lockdown With

In a recent controversy, Sara’s sister Ayra put nude pictures of her on Instagram while they were holidaying in Sri Lanka. Later on, the actress gave a statement to International Business Times and said, “I don’t know what happened. Everything just went wrong. It was a video out of fun made by my sister. She deleted it in no time but it went terribly wrong. She was drunk little bit and then we were just having fun, and this thing happened. I just want to say that since the world has become so fast, sometimes these technologies are also harmful. So, we should be careful.” Also Read - Bigg Boss 4 Contestant Sara Khan Trolled For 'Lip Job Gone Wrong', Actress Hits Back Saying 'It's Just a Filler' 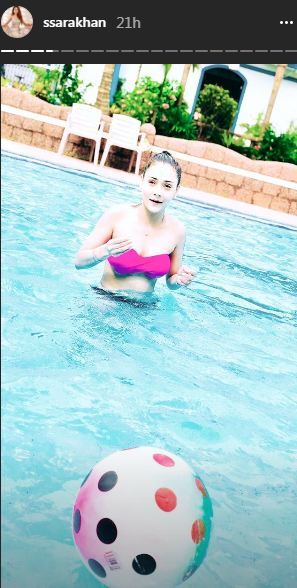 She has anchored for Doordarshan in Madhya Pradesh and ETV. Her debut television show was Sapna Babul Ka…Bidaai on Star Plus in which she played the character of Sadhna.

Her first Indian film was M3- Midsummer Midnight Mumbai and has also worked in Pakistani serials.