Scotch-Brite Called Out For Sexist Logo Featuring Woman With Bindi, Company Promises to Move on From ‘Regressive Beliefs’

Taking criticism the right way up, Scotch-Brite has promised to change its 'regressive' logo after a communications strategy consultant pointed out that the lady with bindi on all of its products except a lint roller suggest sexism

We are living in 2020 where there is no place for racism, castesim or sexism and unlearning the latter after a healthy criticism is Scotch-Brite’s parent company, 3M India. A communications strategy consultant, Karthik Srinivasan, called out Scotch-Brite on LinkedIn after his friend pointed out their sexist logo featuring a woman with a bindi on all of their products except a lint roller. Also Read - Is Saath Nibhana Saathiya Regressive And Sexist? Rupal Patel Aka Kokilaben Says 'It's Progressive'

In his detailed post that grabbed a lot of eyeballs on the social media site, Srinivasan wrote how he could not unsee it after his friend pointed it out to him as the “logo has the vector image of a woman (with a bindi, to differentiate this from their earlier, other country logos that also had a woman’s face)!” Also Read - 'Why All Feminists Show Cleavage' - Sona Mohapatra Was Asked This on Twitter And Here's What She Said 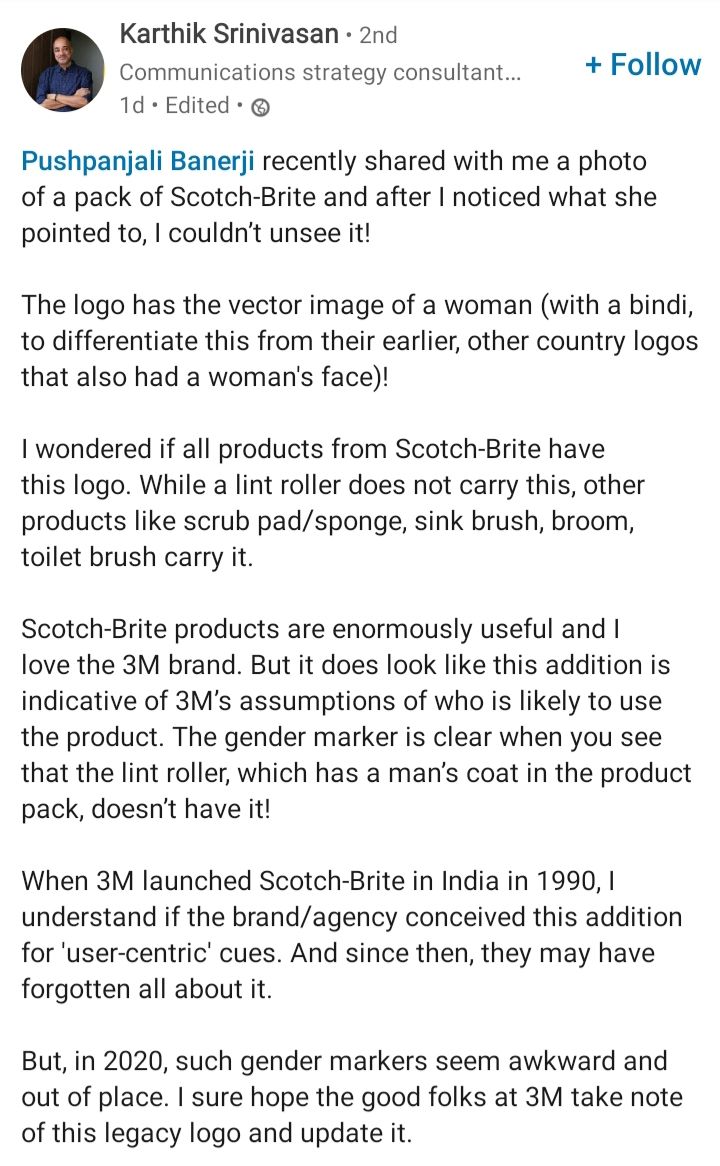 Analysing it for himself, he added after realising that, “While a lint roller does not carry this, other products like scrub pad/sponge, sink brush, broom, toilet brush carry it. The gender marker is clear when you see that the lint roller, which has a man’s coat in the product pack, doesn’t have it!”Srinivasan concluded by asserting that though Scotch-Brite was launched in India in 1990 and it is possible that 3M made the logo keeping in mind “user-centric cues” then forgot about it, such gender makers “seem awkward and out of place” in 2020.

As the post went viral, Head of Marketing at 3M India, Atul Mathur promised to change the “regressive” logo. He commented, “You have correctly surmised that this is a legacy vector, and that it is undoubtedly time to move on from regressive beliefs. Recognising this, we started down the road to drive behavioural change externally.”Sharing the link of Scotch-Brite’s advertisement series titled “Ghar Sabka Toh Kaam Bhi Sabhi Ka?”, Mathur shared how they were working to challenge society’s sexism and gender inequality.

He promised to come up with an updated logo soon.