Currently, she is seen playing the lead in Ishq Mein Marjawan with Arjun Bijlani

Television’s bold actress Nia Sharma recently shared a picture of her in black Calvin Klein sports top and a blue net skirt. While some applauded for her dusky beauty, many critized her for her fashion choice and left mean comments. She was brutally trolled for her latest beachside pictures. One user wrote, “Not good…ye rup pasand nhi”while the other commented, “Hats off to ur patience from being black to transforming it to a painted one.. imagine if u wake up n see urself in the mirror without makeover, would u still call urself sexy ? @niasharma90.” Also Read - Google Bhi Hai Humare Paas! Nia Sharma Slams 'Woke Celebs' Who Are Demonstrating Proning Technique on Social Media

In the picture, Neha is soaking herself in the sun and is sporting nude makeup. Sharing the post, she wrote, “On that Note.. I leave you with your thought #lovefornudemakeup.” Also Read - Aniruddh Dave’s Wife Shubhi Ahuja Rushes To Hospital As Actor 'Critically Suffers'

On that Note.. I leave you with your thought💭 #lovefornudemakeup

This how she was trolled: 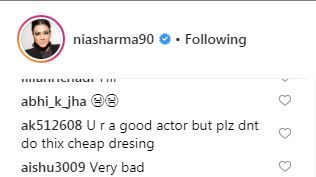 However, this is not the first time that she was trolled for a bold look on social media. Earlier, she was trolled for wearing white sheer monokini dress. However, the outfit did not go well with the netizens rather they trolled her on her dusky complexion and wrote, “I thought u were pretty, now I realised you are really UGLY & kaali. Your bio was the truth, only realised now😂 @niasharma90”. Some other netizens trolled her for her outfit and called her to outfit cheap, and said that the dress looks disaster on her.

Nia is quite a sensation on Instagram and is known to raise temperatures with her bold and glamorous pictures. After making her fans go gaga over her in the first season of Twisted, with her smart revenge moves and her glamorous look, Nia is sporting a much bolder and sexy look as Aliyah Mukherjee in Twisted 2.

Nia rose to fame after playing the role of Maanvi in Ek Hazaaron Mein Meri Behna Hai. She beautifully portrayed the emotions of a girl suffering from cancer. Her chemistry with Kushal Tandon was the highlight of the show. She was also the participant of Fear Factor: Khatron Ke Khiladi season 8 titled pain in Spain. The show was hosted by Rohit Shetty. She entertained everyone but couldn’t win.

Currently, she is seen playing the lead in Ishq Mein Marjawan with Arjun Bijlani.