He justified by saying that the core characteristic of a tiger and a terrorist is the same and we have committed a mistake by accepting tiger as our national animal.

Udupi: Ever thought if there is a connection between tiger and terrorism in India? Well, a seer certainly seems to believe that there is! Also Read - To protect cow, declare it national animal: Vij

On Tuesday, Sri Vishwesha Theertha Swamiji of Sri Pejavar Mutt, Udupi said that tiger as the national animal of this country is the reason behind terrorism activities in India. He made these comments while speaking at a ‘Santa Samagam’ as part of a Yoga camp led by Baba Ramdev in Udupi. Also Read - Declare Cow National Animal, Both Cows And Humans Will be Safe: Jamiat Ulema-e-Hind President Maulana Arshad Madni

More so, he justified by saying that the core characteristic of a tiger and a terrorist is the same and that we have committed a mistake by accepting tiger as our national animal. Also Read - No proposal received to declare cow as national animal: govt

Fret not, he has a solution for it, too–Make cow the national animal. If we had embraced cow, the symbol of love and innocence, there would not have any terrorists born in this country, he says.

He further went on to say that not only has non-vegetarian food caused global warming but there is a need for stringent laws banning cow slaughtering. Pejavar Seer then stressed that along with the preservation of cows, the purification of River Ganga should be another motto of the people.

Needless to say, the absurd and laughable claim was trolled by netizens: 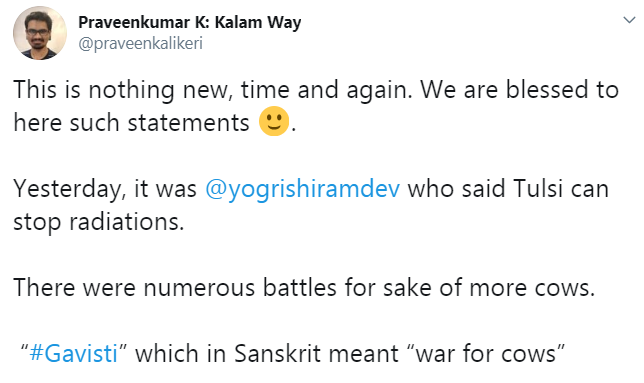 This is not the first time that people had a problem with tiger being the national animal. Many politicians have appealed that the cow should be declared as India’s national animal to ensure its safety and curb slaughtering.