Both Alia Bhatt and Seerat Kapoor are of the same age.

Five years ago, Bollywood witnessed the debut of one of its prominent female stars – Alia Bhatt. We all remember how a then 19-year-old made an impressive start with Karan Johar directed Student of the Year released in 2012. One of the memorable scenes from the movie is when Alia Bhatt turns into a sexy bikini babe. Well, Alia’s famous yellow bikini look has served as an inspiration to hot Telugu actress, Seerat Kapoor. The 24-year-old Raju Gari Gadhi 2 star has copied her bikini look from Alia Bhatt and the result is ‘pretty, hot and tempting’. Seerat Kapoor posts topless hot pictures on Instagram: Nagarjuna’s actress bares it all in a bold photoshoot!Also Read - Alia Bhatt Drops Sun-Kissed Photo In Hot Blue Strapless Bikini From Maldives Diary

Seerat Kapoor first rose to the limelight at the start of 2017 after her topless and semi-nude pictures went viral on the social media. The actress who is sharing screen space with the Telugu superstar Nagarjuna and Samantha Ruth Prahu (now Akkineni) in Raju Gari Gadhi 2 is ensuring to not get lost amidst the presence of big names. The self-confessed dancer-actor-singer who is well known for her bold photoshoots posted a picture in a bikini and it instantly reminded us of someone. Well, that someone being none other than Alia Bhatt. Also Read - Alia Vs Alia Clash At BO: RRR To Have Box Office Clash With Gangubai Kathiawadi | Check Release Dates

The Mumbai-born actress uploaded a picture wearing a yellow halterneck lacy bikini. She tied a sarong of the same colour tied around her curvy waist. Now, this look is oddly similar to the pose Alia Bhatt gave in her debut film, Student of the Year. We really hope you remember the scene when Alia’s character, Shanaya tries to make her boyfriend, Rohan (played by Varun Dhawan) jealous by massaging his friend Abhimanyu (Sidharth Malhotra). Karan presented Alia Bhatt’s sexiest avatar in this sequence of the film. Seerat Kapoor semi-nude picture goes viral! Nagarjuna actress sexes it up in hot photoshoot. 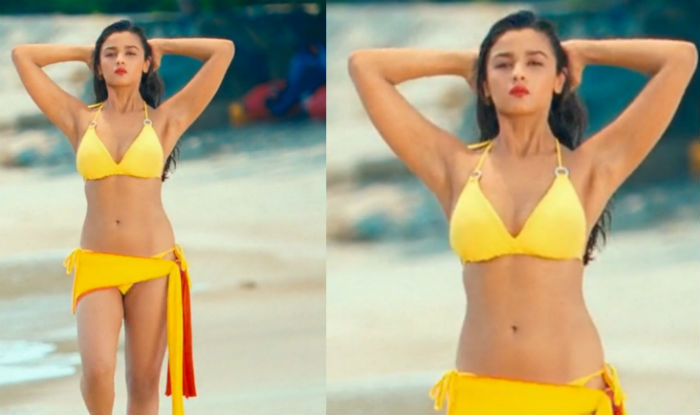 Both Alia Bhatt and Seerat Kapoor are of the same age. While the former is ruling the Bollywood with a number of successful films under her belt, the latter is cementing her place in the south movie industry. Seerat is making her comeback to the silver screen with Raju Gari Gadhi 2 (RGG2) almost after two years. After her stint as an assistant choreographer, where she worked with Ranbir Kapoor in 2011 film Rockstar, Seerat is keen on proving herself as an actress. She has signed three movies – Ravi Teja’s Touch Chesi Chudu, Allu Sirish’s next and Ravikanth Perepu’s upcoming film. Sounds quite interesting.