Is this ship floating in the sky? Here's the truth behind the viral optical illusion.

An optical illusion where it looks like a ship is flying in the sky is going viral on the internet. A man in Scotland, Colin McCallum, was stunned when he a saw a ship ‘floating’ in the air last week. As the 23-year-old man travelled through Banff, Aberdeenshire, he saw a red vessel on the horizon.Also Read - Cute Desi Goats Dance On English Beats With Swagger Walk | Watch Hilarious Video

He shared a photo on Facebook, in which the ship appears to be floating a few inches above the water. Due to the similar colour of the sky and the ocean, the ship appears as if it’s sitting on clouds. Also Read - Two-Year-Old Falls From 12th Floor, But Delivery Man Catches Her | Watch Viral Video

“Saw a real-life optical illusion in Banff today,” Colin McCallum said in the caption of his post. The Facebook post has already been shared more than a thousand times. Also Read - Canadian Man's Bhangra Dance After Getting COVID-19 Vaccine Goes Viral. WATCH VIDEO

Speaking about the amazing optical illusion with Daily Mail, Colin McCallum said, “When I first saw the boat, I had to do a double-take because I genuinely thought it was floating. Upon further inspection, however, I noticed that it was in fact just a remarkable optical illusion.”

“It was caused by a cloud formation closer to the shore which changed the colour of the water closer to the land. The boat, being further away, was in a cloudless area and therefore the sky reflected the sea- making it look like the boat was floating,” he added.

“I genuinely can’t understand what is going on here,” a Facebook user said. 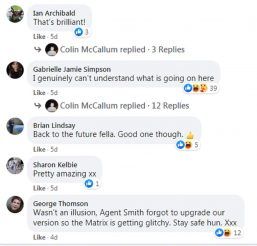