Shocking: Man hit by a container truck, what happened next will make you believe in miracles!

Watch the video and tell us if you started believeing in miracles already! 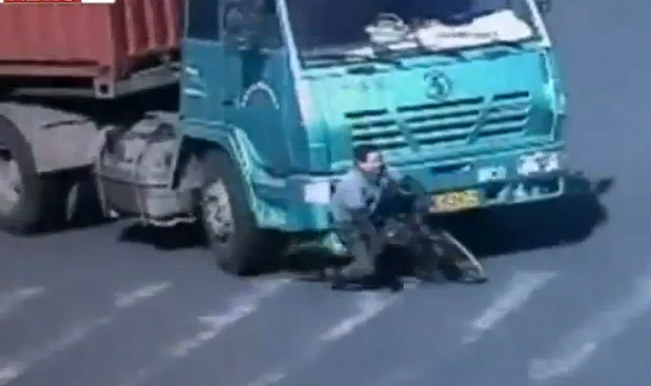 In a shocking incident that took place in China’s  Zhejiang province, a container tractor hit a man but what happened after the accident left everyone shocked. The video seems to be a CCTV footage which shows a narrow escape of a man when a driver drives a container truck over a man. Also Read - UP Woman Studying in US Dies in Road Accident While Trying to Evade Eve-teasing in Bulandshahr; BSP Demands Action

In this video, a man on cycle is seen taking a turn. Meanwhile a driver rolls a truck over him. After hit the truck, death seems certain for the man. But in a shocking move, the man manages to escape himself from the tires of the truck and survives the accident. He comes out alive and seemingly uninjured. Also Read - SL Cricketer Kusal Mendis Arrested After Being Involved in Fatal Road Accident

What more shocking is, the truck driver did not even bother to stop the vehicle after the accident. He continues to drag on inspite of knowing that he hit a cyclist in broad day light. Curiously the man inspite of being mowed down by the massive container, running on countless number of wheels (21 to be précised) survived without a single scratch on his body.

Watch the video and tell us if you started believeing in miracles already!