Shocking: Man hit by a loaded tractor, what happened next was unbelievable!

In a shocking incident took place in Kolhapur, a loaded tractor hit a man but what happened after the accident left everyone shocked. 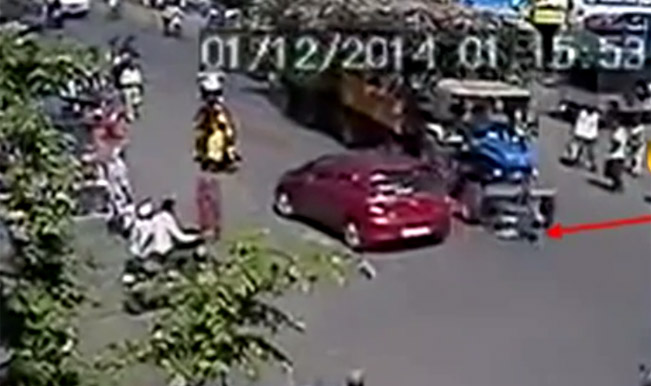 In a shocking incident that took place in Kolhapur, a loaded tractor hit a man but what happened after the accident left everyone shocked. The video seems to be a CCTV footage which shows a narrow escape of a man when a driver drives a loaded tractor over an old man. Also Read - Haldi Does Not Cure Virus: Lilly Singh Busts 'Aunty Ji's' Myths Related to COVID-19 And The Internet Just Cannot Stop Laughing!

In this video, a man is seen crossing the road. As the man comes in the middle of the road, a loaded tractor hits him and even runs over him. What is shocking is that the man survives the accident and walks off alive and seemingly uninjured. Also Read - Video of Crying Kid Telling Police Father Not to Go on Duty Goes Viral, Says ‘Bahar Corona Hai’

However, the public accuses the driver for the accident but after watching the video you will realise that the man was also responsible for what happened with him. He crosses the road without seeing that several vehicles are going on road. Watch the narrow escape of the man below: