Sikh protesters blocked Jammu-Pathankhot National Highway today after there were clashes in the region on Thursday. 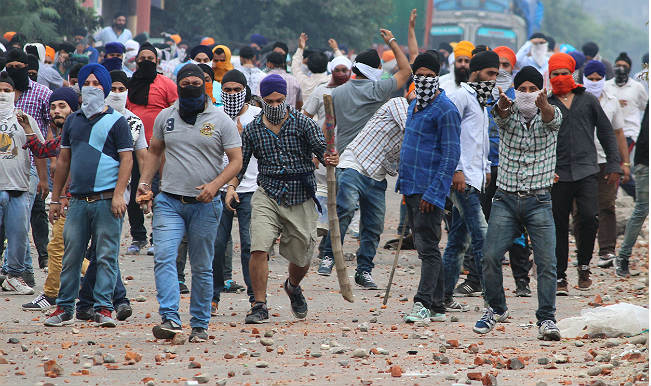 Sikh protesters blocked Jammu-Pathankhot National Highway today after there were clashes in the region on Thursday following violent clashes over removal of posters of Khalistani militant in Jammu city. One person was killed and seven others, including three policemen, were injured in the clashes. All schools and colleges in the area have been shut for the day. Also Read - Farmers’ Protest: Khalsa Aid Distributes Free Sanitary Pads to Women, Installs Portable Washrooms

A group of Sikh youth were protesting over removal of Khalistani militant leader Jarnail Singh Bhidranwale. It began with the group of Sikhs, armed with sticks and kirpans, started protesting on Ranibagh-Gandhigarh belt on Satwari- R S pura road to protest removal of Bhidranwale’s poster ahed of his death anniversary on June 6. The frenzied group also shouted pro-Khalistan slogans. (Also read: One killed, 7 injured in clashes between Sikh youth, Jammu and Kashmir cops) Also Read - Govt Asks Wikipedia to Remove Link that Shows Wrong Map of Jammu and Kashmir

The angry Sikh youths pelted stones at the police resulting in lathi-charge. Section 144 was imposed in various parts of the Jammu city and preventive arrests were made. Late in the night curfew was imposed in areas of Satwari, Ranibangh, Chatta, and Gadigarh Miransahib. (Also read: Sikh youth clash with police in Jammu, 2 cops injured)

Sikh community members representing a particular organisation had put up posters of Bhindranwale and other terrorist leaders on Satwari-RS Pura road Jammu ahead of a programme to pay tribute to him.