Irani indulged in a verbal fight with Sugata Bose and angrily replied when TMC members tried to interrupt during her speech. 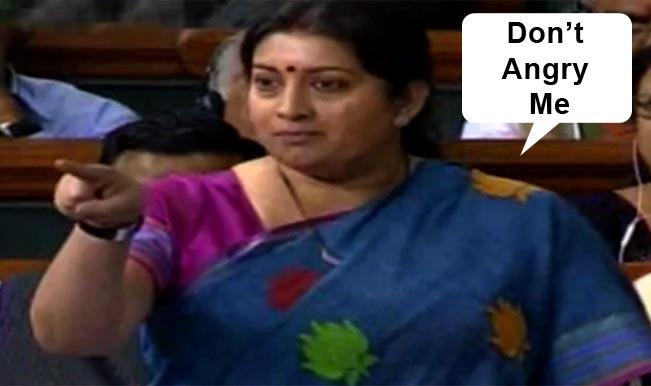 Smriti Irani, the most controversial minister of the Narendra Modi cabinet, is again trending in mainstream news and on social media for her fiery speech in Parliament. The Human Resource Development Minister defended some of her controversial decisions and rejected the Opposition’s charge of saffronisation of the education system. Irani was speaking during a debate on Demands for Grants for the HRD Ministry, in which she poured her anger on Sugata Bose of Trinamool Congress (TMC) who in turn demanded an apology from her. Also Read - Tamil Nadu Election 2021: Smriti Irani Performs Dandiya With BJP Workers in Coimbatore | WATCH VIDEO

Defending her decision of scrapping the four-year undergraduate programme (FYUP) programme from Delhi University, Irani said, “The programme would have produced 77,000 students (each year) with degrees without any worth.” The 39-year old minister further asked the Opposition, “Had they been on the streets, were we ready to meet that situation? If I have protected their future, why are they hurt?” Also Read - Ekta Kapoor Wishes BFF Smriti Irani With a Very Special Birthday Request, Says 'Get Off Your Diet'

On the charge of saffronisation of education, she said her government was committed to spreading education “within the limits prescribed by the Constitution”. (Also watch: Smriti Irani vs Arnab Goswami Full Interview: Union HRD Minister locks horns on ‘Frankly Speaking’; Arnab left red-faced on Times Now!)

During the debate in Parliament, Irani indulged in a verbal fight with Sugata Bose and angrily replied when TMC members tried to interrupt her speech. “Aapni jokhon bolechhen, boshey shojjo korun. Aamar jobab aashte din. (If you have made allegations, then sit through my reply),” Irani responded furiously.

The war of words began when Bose joined the Congress’ Sushmita Dev in criticising what they called bias in appointments to the Indian Council of Historical Research (ICHR). With her fuming replies in the Lok Sabha, Irani drew attention. People have been giving their views in favour and against Irani’s behaviour on social media. (Edited by Shweta Parande)

Watch video of the scratchy replies of Smriti Irani in Parliament!