Know the real reason behind this Bewafa woman Sonam Gupta! But hey, what about the Rs 10 original note with the words Sonam Gupta Bewafa Hai?

With Prime Minister Narendra Modi announcing demonetisation on the evening of November 8, all hell broke loose in India, as the notes of Rs 500 and Rs 1000 in currency were suddenly invalid. People started queuing up at banks from the next day to exchange the ‘newly’ old notes for freshly minted and ‘pink’ Rs 2000 notes. Over the days, queues starting getting longer and longer at banks and automated teller machines (ATMs) to exchange old currency and withdraw cash in Rs 2000 or Rs 100 notes. But the Internet as usual was abuzz with some jokes or the other on #Rs500, #Rs1000 and #demonetisation. And one such photo doing the rounds was that which contained Rs 10 and Rs 2000 notes with the words ‘Sonam Gupta Bewafa Hai‘ written on them in blue ink and in Hindi. The words mean that a woman or girl named Sonam Gupta is not loyal to her lover and has ditched him.Also Read - Delhi-Dehradun Economic Corridor: You Will Soon Reach Delhi From Dehradun in Just 2.5 Hours | All You Need to Know

This Sonam Gupta Bewafa Hai trend is actually a few months old, when the real Rs 10 note featuring the words surfaced on Twitter. But after the Rs 2000 note with the words Sonam Gupta Bewafa Hai began to trend, Modi Bhakts soon offered an explanation for the same. A WhatsApp that went viral a few days ago explains it all. It says, “Believe it or not, Modi ji, Arun Gokil and perhaps even Ajit Doval and 2 more Senior IAS Rank Modi loyalist officials used to speak among themselves “Sonam Gupta bewafa hai” which nobody could understand even RBI governor & FM Arun jaitley did not understand and this line “Sonam Gupta bewafa hai” they were saying among themselves for past 6 months.” So this guy is saying that Sonam Gupta Bewafa Hai was actually a code word used by government officials to talk about demonetisation, so that the people with black money wouldn’t get a whiff of it! The code word theory of Sonam Gupta Bewafa Hai has been explained in this picture in detail, with some Math. Take a look. Also Read - BSF Celebrates 57th Raising Day, To Exchange Sweets With Pakistan On Attari-Wagah Border 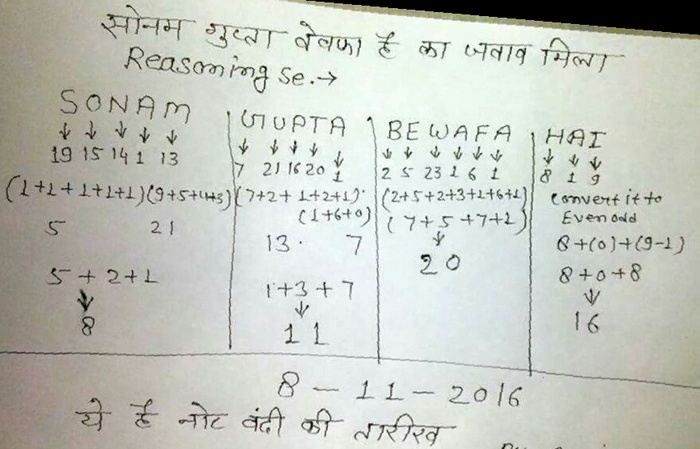 Also Read - 'No Data' on Farmers' Deaths, So No Question of Financial Aid: Government

So, that was the real reason behind this Bewafa woman Sonam Gupta who ditched her lover! Well, girls whose name is actually Sonam Gupta will now heave a sigh of relief! A rather weird effect of demonetisation, isn’t it? But hey, what about the Rs 10 original note with the words Sonam Gupta Bewafa Hai? So this real reason story is basically a hoax and we do not believe it! ALSO READ: Bewafa ‘Sonam Gupta’ is breaking the internet!