Many social media users found her brown pantsuit to be horrible

Sonam Kapoor who was into headlines lately for her appearance at MAMI event was trolled brutally for wearing an oversized coat. Sonam is known for her sartorial fashion statements and always make headlines for looking jaw-dropping gorgeous. However, this time her outfit did not go well with the netizens and in no time she was the target of the online trolls. Many social media users found her brown pantsuit to be horrible. Also Read - Sonam Kapoor Reveals Why She Returned to India Amid Coronavirus Outbreak, Says 'My Father is 63'

Many trollers thought that she has borrowed her outfit from her brother on the occasion of Raksha Bandhan and forgot to return it while others thought that it is a funny dress. One social media user wrote, “a rare moment where @sonamkapoor’s fashion choice gone wrong.” Also Read - Sonam Kapoor Wishes Mom Sunita Kapoor on Birthday, Misses Her Badly Amid Quarantine- Check Instagram Post

Sonam was invited at the dinner hosted by MAMI, where she met Kiran Rao and Anupama Chopra among others. What stole the limelight was how she decided to look at the event. A brown pant-suit, dramatic makeup, a black minaudier, heels, hoops and that big permed hair. Also Read - Sonam Kapoor, Hrithik Roshan Express Their Happiness as BMC Announces 2 Positive Cases 'Recovered'

This is how Sonam was trolled: 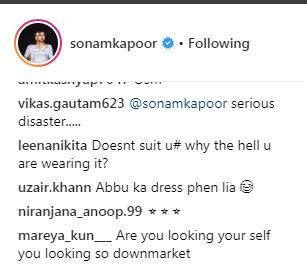 Sonam, who has been paired with South-star Dulquer Salmaan in the film, has got her hair temporarily curled for her role. It will now be interesting to see how this Bollywood’s fashionista manages to flaunt her stylish self in the best manner possible.

On the professional front, Sonam has begun shooting for her next, titled The Zoya Factor.