Soumya Seth and Arun Kapoor are married! See wedding pictures that are viral!

Television actress Soumya Seth aka Somya Seth got married to her fiance Arun Kapoor on January 15, 2017, at a resort in the United States. See their wedding pictures!

Television actress Soumya Seth aka Somya Seth got married to her fiance Arun Kapoor on January 15, 2017, at a resort in the United States, say reports. The actress, who was seen on Color’s TV show Chakravartin Ashoka Samrat as Kaurwaki and also as Navya on Star Plus, had got secretly engaged to her beau in mid-2016. And Somya and Arun are now man and wife! As expected, some wedding pictures shared on Instagram by Somya’s fan page from the wedding of the latest legally married TV couple have gone viral. Take a look!Also Read - Somya Seth on Battling Suicidal Thoughts When She Was Pregnant: ‘I Could Kill Myself, My Son Saved Me’

When she had got engaged, Somya Seth had posted a photo with Arun on her Instagram account, which we had shared with you then. “Because you are my everything !! I Love You,” Somya had written in her post on Instagram, without giving out any deets. She had shared another post with the words, “We rise in love ..#SOAR #us #forever”. How sweet! And now the actual wedding of Somya Seth and Arun Kapoor has taken place in the US! In the wedding pictures, we can see Somya Seth in her wedding finery in two pictures, wearing a traditional outfit in red and accessorised with a maang tika, nose ring, earrings, necklaces, bangles and kalirey. Arun Kapoor is seen a traditional outfit complete with a turban, crown and holding a kirpan. Both are wearing garlands made of flowers, but the bridegroom is also wearing a garland of currency notes! At a time when India is still reeling under demonetisation, this dulha is wearing a noton ki maala and that too, in US dollars! Also Read - Somya Seth Makes Another Cryptic Post Hinting at Her Husband's Past Criminal Record

In another picture, Somya and Arun can be seen in western wear, doing ball dance! Take a look at some Instagram pictures of their wedding ceremony, sangeet and wedding reception, and some pictures Somya shared earlier on social media. Also Read - Navya Actor Somya Seth's Latest Instagram Post Hints at 'Physical Abuse', 'Illicit Drugs' And no 'Prince Charming' 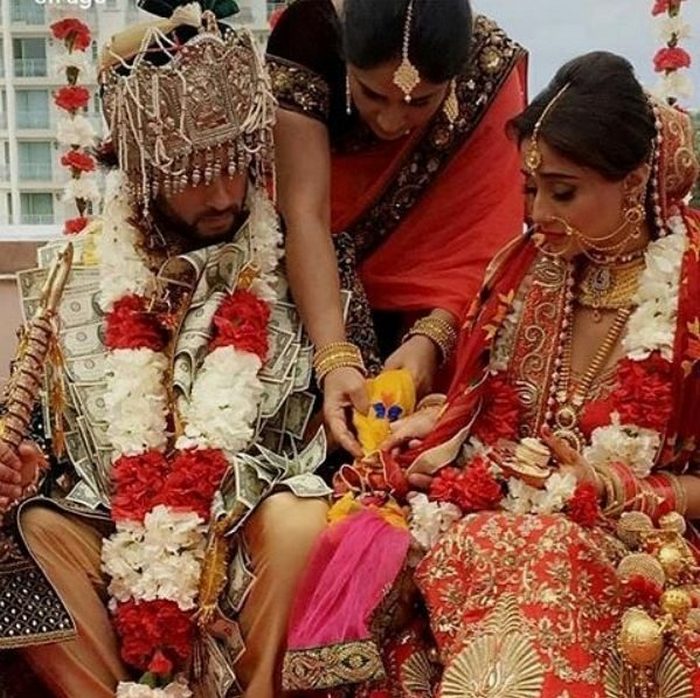 Congratulations to Somya Seth and Arun Kapoor on their wedding!