Led by Joe Root's century, England managed to post 309 for six in 50 overs against Sri Lanka in the ICC Cricket World Cup 2015 - Here are the Top 5 highlights of England's innings 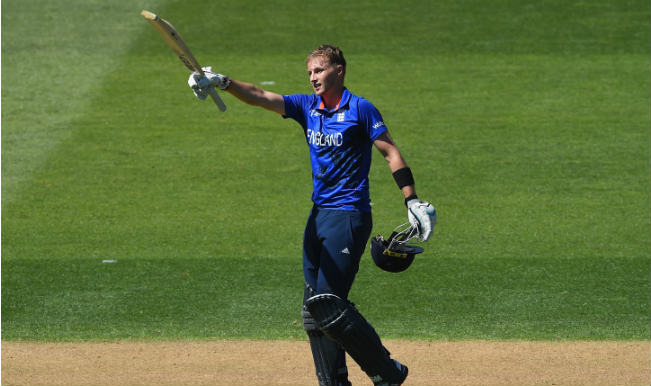 Led by Joe Root’s century, England managed to post 309 for six in 50 overs against Sri Lanka in the ICC Cricket World Cup 2015 at the Westpac Stadium in Wellington on Sunday. There were quite a few interesting moemnts in the match. Watch the Live Streaming of the Sri Lanka vs England, ICC Cricket World Cup match here Here are the Top 5 highlights of England’s innings: Also Read - South Africa Recall Faf du Plessis For Home Series Against England

1) Moeen Ali-Ian Bell stand: England skipper Eoin Morgan won the toss and elected to bat. Yet again, England got off a brilliant start. Moeen Ali and Ian Bell helped the Poms race away to the 50-run mark off just 40 balls. However, like many time in the recent past the southpaw ended up giving his wicket away after getting off to a good start. Ian bell, meanwhile consolidated the innings. They put up 62 runs off 56 balls for the opening wicket.
Also Read - Vision of US For Sri Lanka Very Different From ‘Predator’ China, Says Pompeo

2) Mini Collapse: In the next 49 runs, England lost three wickets to Angelo Mathews, Tillakaratne Dilshan and Suranga akmal to hand back the initiative to Sri Lanka. With the fall of wickets, the run rate also dropped. Skipper Eoin Morgan did the resurrection act with Joe Root. After the fall of wicket of the skipper, James Taylor joined Joe Root to take the attack on the opposition and put England back in command of the innings. They put on a record fifth wicket partnership for England in a World Cup.

3) Joe Root’s century: Joe Root finally came to the rescue with a fine century and became England’s youngest centurion in a World Cup match, overtaking David Gower. He didn’t go beserk, but scored at a good rate. He reached his half-century off 66 balls. But from thereon, he unleashed his attacking game on the Sri Lankan bowlers. He finished at 121 off 108 balls.