The untimely demise of Sridevi has left millions of fans in shock. The legendary actress, who was in Dubai to attend her nephew Mohit Marwah’s wedding, passed away after suffering a cardiac arrest. The 54-year-old was a Bollywood legend, and one of the rare female stars with enough celebrity megawattage to match the lions of the Indian film industry, and enough above-the-title prestige to carry a film on her own. She was known simply as “Sridevi” – but this was not a kind of Madonna single-name branding. She was so ubiquitous that people thought of her as a friend.

Here is looking back at the love story of Sridevi and Boney Kapoor, one that endured every imaginable obstacle and triumphed in the end. They were happily married for over two decades, until Sridevi was cruelly snatched away by death. Sridevi was Boney Kapoor’s first sight love. Boney Kapoor had revealed once, “I fell in love with Sri when I watched her Tamil film during the late 1970s. After watching her film, I wanted to know more about her. I had specially gone to Chennai at her house to meet her, but she was shooting in Singapore. I returned to Mumbai disheartened.” He added, “After some time, I watched Sri’s Solva Sawan (1979). I desperately wanted to meet her. I wanted her to work with me. One day I went to meet her on the set (of a movie). Sri is an introvert. She doesn’t talk to strangers. She talked to me in half broken English and Hindi and just said that her mother takes care of her professional matters.” (Also read: Following Sridevi’s Death, Karan Johar, Tabu, Farhan Akhtar Rush To Be With Janhvi Kapoor – See Pics) Also Read - Janhvi Kapoor Shares Sridevi's Hand-Written Note on Her 3rd Death Anniversary

Boney Kapoor, who married Sri in 1996, said when he met his future mother-in-law, he offered Mr India and Sridevi’s mother asked for Rs 10 lakh to sign the film. “When she asked for Rs 10 lakh, I offered her Rs 11 lakh because I wanted to be close to Sri. Her mother was completely impressed with me. Sri was the highest paid actresses of that time and she later confessed to me that she thought I was a crazy producer who was offering more than what she had asked for,” said Boney Kapoor. (Also Read: Rishi Kapoor Slams The Media For Referring To Sridevi’s Mortal Remains As A Mere Body) Also Read - Sridevi's 3rd Death Anniversary: Watching English Vinglish Was Disturbing, Says Gauri Shinde 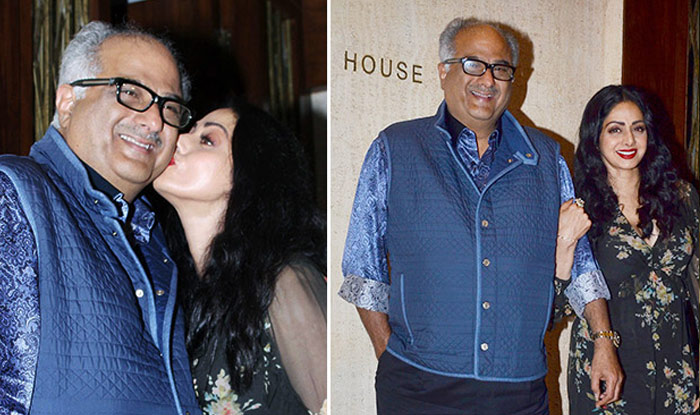 It was a “dream come true” for him when Sridevi acted in his production venture Mr India. In the super hit sci-fi comedy, directed by Shekhar Kapur, Boney Kapoor roped in his younger brother Anil Kapoor to play the male lead opposite Sridevi. “I made sure she was comfortable on the set (of Mr India). I personally took care of everything. There were no vanity vans at that time, but I arranged for a separate makeup room for her. Gradually, she felt comfortable with me.” Mr. India was released in 1987 and the film was Sridevi’s one of the favorites. Later Sridevi starred in his films like Roop Ki Rani Choron Ka Raja and Judaai.

The sudden death of Bollywood actress Sridevi at 54 has left Boney Kapoor without a wife and her two young daughters (Jhanvi and Khushi) without a mother.