The seller is being criticised for the blatant cultural appropriation, which has hurt the sentiments of many.

The seller was using e-commerce platforms such as Flipkart to sell the product, which is equally being criticised for the blatant cultural appropriation, which has hurt the sentiments of many.

The issue was first raised by a Facebook page called “Decolonial Indigenous Memes”, that called out the store’s racist portrayal of Nagas and wrote, ”Recently, it has come to our notice that certain sellers on Amazon, Flipkart and Snapdeal are selling grossly misrepresenting racist “costumes” as Northeastern traditional attire (Naga, in this case). Our culture, our attires and our traditional symbols have already been reduced to a commodity which the mainland can exoticize.” 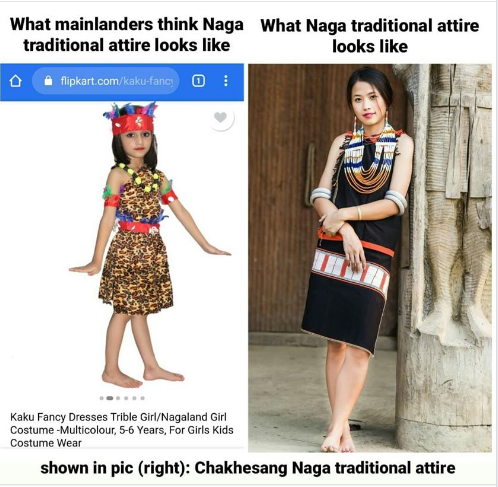 The page also shared an image of the actual traditional costume (Chakhesang Naga attire) worn by a Naga woman, adding, ”Such false and offensive representations are nothing new, yet these go on unchecked in the mainstream. It is time for indigenous people to be assertive so we can stop this nonsense”.

Soon after, many on Twitter criticised the store and Flipkart and demanded these racist costumes to be taken down. Some users also pointed out that the same store is also selling the product on other platforms like Amazon and Snpadeal.

One user wrote, ”@flipkartsupport stop being hungry for money which is based on inhumane ideas. misrepresentation of any society or culture is unacceptable.@flipkartsupport should take it seriously and remove such ads and sellers from its platform as soon as possible.”

. @Flipkart Non of the tribes in Nagaland has leopard print as their traditional attire. Stop this misrepresentation! @WeTheNagas pic.twitter.com/mOZ1Hvz4LE

We condemn the insult of Naga bros and sisters by Flipcart online business organisation. This is not merely hurt the egos of Nagas also it hurts the NE sentiment. Please learn to respect the NE Indians.

@flipkartsupport stop being hungry for money which is based on inhumane ideas.
misrepresentation of any society or culture is unacceptable. @flipkartsupport should take it seriously and remove such ads and sellers from its platform as soon as possible.

Hi @Flipkart, These are not even close to what Naga/Mizo traditional attire looks like. These need to be taken down & the seller should consult with experts from northeast India before uploading any tribal “Fancy Dress”. This amounts to cultural appropriation & misrepresentation pic.twitter.com/aE2fXFVpRl

@Flipkart what sort of misinterpretation is this?Where on earth has any1 associated with u all seen such a leopard skin dress being work by any1 in Nagaland?Stop such stereotype shit

@Flipkart So much ignorance in one attire. Can't even market a product without misrepresentation. Take necessary action immediately

This is such a typical 1980's Bollywood representation of tribal culture, which immediately translated to leopard or tiger print clothes. I hope the vendor takes this down or at least changes the product description.

What do you think?