~The Coolest Stone Cold Stunner Of All Time~ 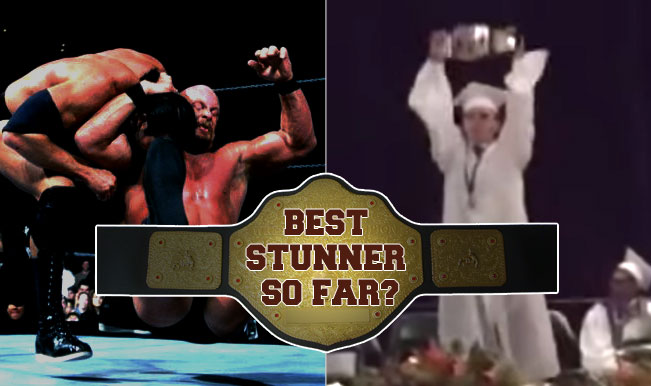 Stone Cold Steve Austin, a former Worldwide Wrestling Entertainment (WWE) wrestler, is one of the greatest wrestling icons of all time and his finishing move, the ‘Stone Cold Stunner’ is fondly remembered by fans and a dummy move is still tried by wrestling buffs. A video has surfaced on YouTube that shows a student hitting another student with a Stone Cold Stunner on the stage during the graduation ceremony. As much as the video is hilarious, given the occasion used to pull off a Stunner, it is also appalling to see students indulging in a violent activity even on the day of graduation. Also Read - WWE Monday Night RAW Results: Drew McIntyre Defeats Randy Orton to Reclaim Championship

The 15-second-video begins with a student raising a dummy of WWE Championship (or sorts) belt above his head, with the crowd cheering seeing him in this gesture. The students at University of Miami- Graduation School in United States are visibly jubilant at the entire act played out. Another student intervenes on the stage to disrupt the glory moment and ‘stuns’ his counterpart. (Also Watch: The best 10 WWE finishers we have witnessed) Also Read - WWE's Monday Night Raw Viewership Drops to a Historical Low

Watch the shocking video of a student hitting a ‘Stone Cold Stunner’ to his counterpart on the stage during graduation ceremony at University of Miami, below: