Students Still Pissed? After Mann Ki Baat, All of PM Modi’s Videos Are Getting Massively Disliked on YouTube

Most of the comments are from NEET, JEE aspirants and students aspiring for various government jobs who have been left frustrated due to delay in results

Prime Minister Narendra Modi on Thursday addressed the third leadership summit of US India Strategic and Partnership Forum (USISPF) and said the global pandemic has impacted everyone. He said it is testing everyone’s resilience, public health system and economic system.Also Read - PM Modi’s ‘Mann Ki Baat’ Video Gets Over 5 Lakh Dislikes on YouTube Amid Outrage Over NEET, JEE

Meanwhile, soon after the video of PM’s address was uploaded on Bharatiya Janata Party’s YouTube channel, it started getting a lot of dislikes. At the time of writing this story, the video has only 11,000 likes as compared to 97,000 dislikes.

Most of the comments are apparently from NEET, JEE aspirants and students aspiring for various government jobs who have been left frustrated due to delay in results, recruitment notification and issuance of admit cards. 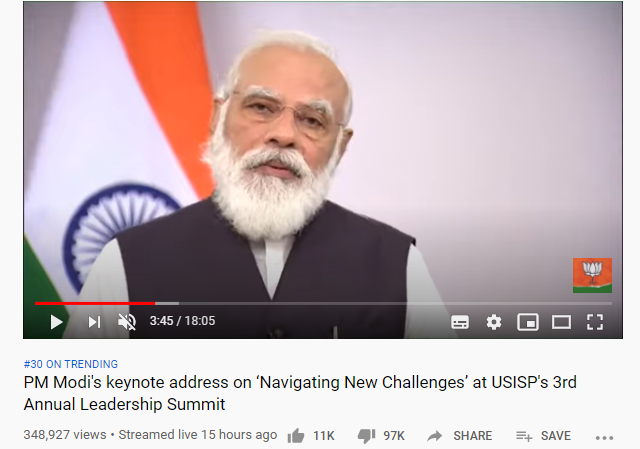 After getting dislikes on another of PM’s video of his interaction with IPS Probationers, before it was even uploaded, the BJP disabled comments and likes/dislikes on the channel.

PM sir is interacting with IPS probationers, like & chat disabled on BJP India, PMO & Narendra Modi youtube channels. There were 67k dislikes even before the beginning of the event, @BJP4India anticipated worse and disabled interactive features of an interaction event. Sensible. pic.twitter.com/s6QELjJbzI

it's already being 'disliked' Many

Gone Were Those Days When you

PM Modi is supposed to speak at an event at 11 am which will be live streamed on BJP's YouTube but there are already more than 64k dislikes.#YuvaDislikeModi pic.twitter.com/h7O3PhfRv8

Before this, his monthly radio address, Mann ki Baat, got a record number of dislikes amid outrage over JEE, NEET exams. On Sunday, citizens across the country had expected the PM to address the issue of exams in his monthly address, however, the PM skipped the topic and instead chose to talk about dog breeds and toys, inviting the wrath of the public.

After the episode aired, #Mann_Ki_Nahi_Students_Ki_Baat started trending on Twitter, with people asking why the Prime Minister had not addressed the exam postponement issue and rebuked him for playing with students’ lives.