Suchitra Karthik accuses Dhanush & Anirudh of having sex with her in latest Twitter rant! How true are these allegations?

Popular Tamil RJ and singer Suchitra Karthik in her latest meltdown on Twitter has accused South actor Dhanush and his music director friend, Anirudh Ravichander of having sex with her after spiking her drinks! Suchitra Karthik Kumar in a series of tweets has made serious allegations on Tamil superstar Rajinikanth’s son-in-law Dhanush, Anirudh and singer Chinmayi of doing nasty things to her and threatening them of leaking private pictures and videos online as proof. Suchitra has been on a rampage going berserk against Dhanush and his friends from Kollywood. The 34-year-old Telugu singer has leaked intimate pictures of actress Hansika Motwani in a bikini, Rana Daggubati and Trisha’s kissing picture. The singer also targets Anirudh Ravichander, Andrea Jeremiah and Dhivyadharshini and their private photos are also splattered on the internet. Suchitra Karthik leaks nude pictures of actress Anuya Bhagvath on Twitter! Real or Fake? Also Read - Jagame Thandhiram Teaser Out: Dhanush Starrer Portrays His Journey From Madhurai To London, Film To Release on Netflix

Suchitra Karthik who is one of the famous singers of Telugu cinema industry has been on a different mission these days. She had an ugly fight with actor Dhanush in the month of February 2017, and it has only been escalating ever since. Suchitra aka RJ Suchi had alleged of being manhandled by actor Dhanush’s team and tweeted a picture of her bruised arm. But now the drama is going murkier with the singer accusing the actor of having sex with her along with his friend, Anirudh. Suchitra Karthik leaks intimate pictures of Dhanush, Hansika Motwani, and other Tamil stars on Twitter! See shocking deleted pics posted online. Also Read - Dhanush Starrer Karnan to Hit The theatres Worldwide in April 2021 - Watch Teaser

In a series of cryptic and fairy abusive tweets targeting Dhanush, Suchitra writes, “I challenge #Dhanush, #Anirudh, #Chinmayi – I know you wil troll and deny this, Do you have guts to deny this cheap act?” She further adds, “I took those clips from #Dhanush phone and #anirudh phone, and those pics will be leaked to you as promised to you all”. This tweet of Suchitra opening the Pandora box reads: “both had sex with me & left me in the bed. with my half sleep, both were watching #Chinmayi clip that was recorded few yrs ago”. Her rant further reads: “but some how they mixed something in it that made be drowsy and I was flat. It was horrible experience after that cannot be said here.” Also Read - List of Bollywood Films to Release With Terrific Trios in 2021-2022 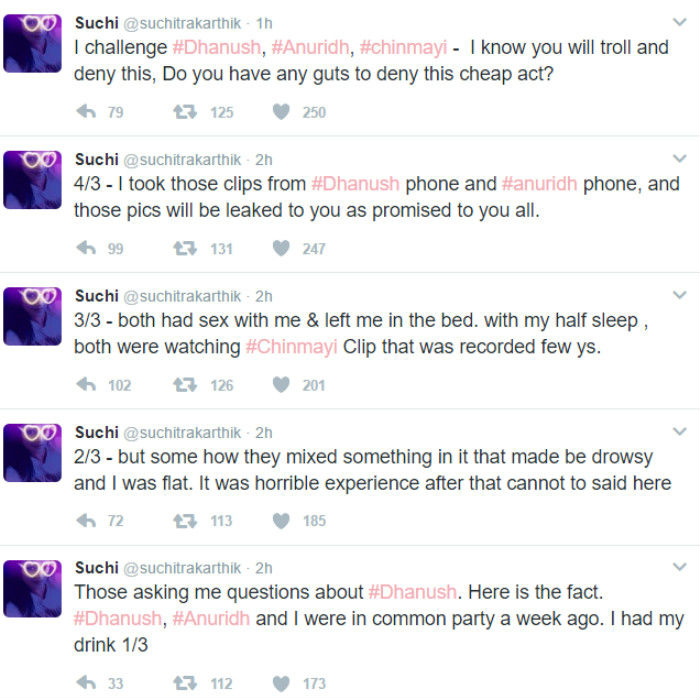 Suchitra Karthik is either having a meltdown or is a serious victim of Twitter hacking, as she and her husband Karthik Kumar would like the world to believe. Her husband issued a statement on the latest mayhem caused by the cheap theatrics on Suchitra’s Twitter account in a video post. He writes, “This is a overwhelming kind of support and understanding that has been pouring in with respect to Twitter updates in Suchi’s handle. The people who’ve been mentioned in it in a not-so-positive way have actually reached out to me seeking and clarifying and understanding and trying to understand the situation.” Rana Daggubati is kissing Trisha in Suchitra Karthik’s Twitter leaks of intimate pictures. 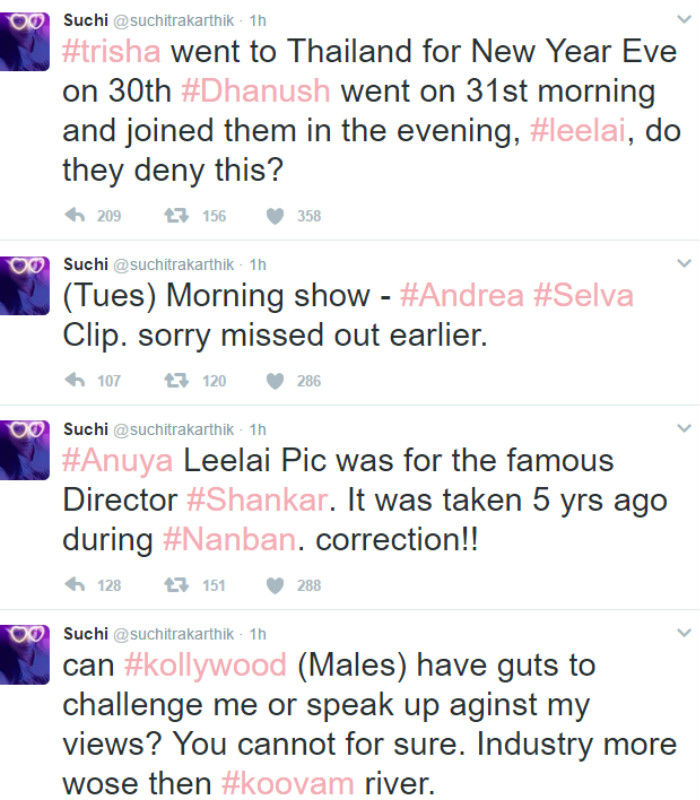 Karthik further says, “And I had the honesty to tell them that it is indicative of a certain emotional state that Suchi has been going through that we all are as a family trying to understand better, and better to address. And in that process there are some emotional outbursts that have happened which have, as we see, very little factual basis. I really value all of their understanding. I really value all of their love and care and I am sure if this were to happen to somebody in your family, I wish you would also get the same love, understanding and care that I am receiving right now from the people who are hurt by it the most. They realise there is nothing personal and It is indicative of a certain emotional state. 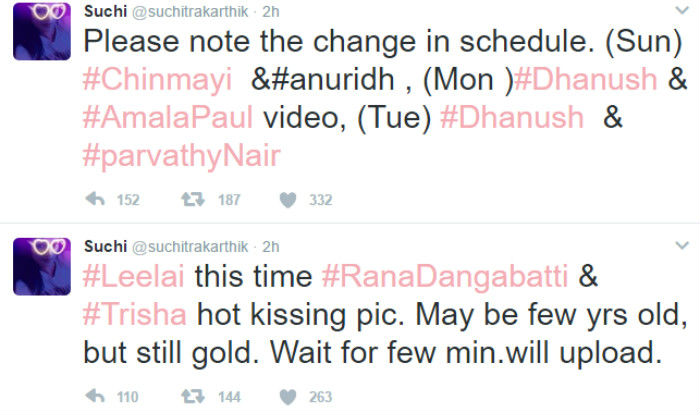 The husband of controversial and troubled singer has a special request for fans and media, “I request the Press not to go to town with this.. and not take any of the facts seriously.. they’re not facts.. they’re not to be taken for what they are.. we should understand the situation better.. we should extend a little restraint on going to town about this.. treat such like you would treat your own family member.. thank you for giving my family the benefit of the doubt.” 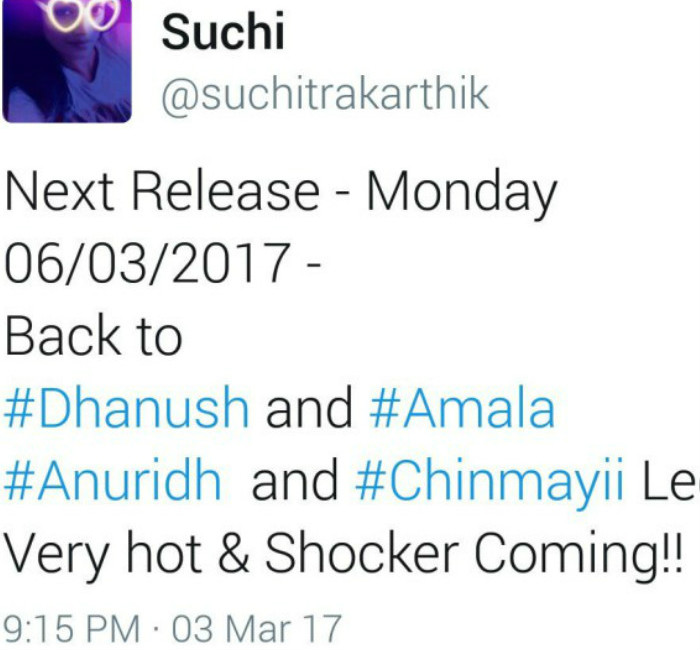 Suchitra Karthik gave a clarification on these series of allegations to Sun News, where she revealed that the singer-RJ’s twitter has been hacked and a police complaint has been registered with the Chennai Police. Suchitra also revealed that the person who hacked her Twitter asked her to deactivate her account after which she shut down the original account and is currently using a temporary account, @suchitrakarthc. The singer has been clarifying that the pictures leaked and allegations made were all by the hacker and has also apologised to all the actors, directors and other celebrities whose image has been tainted or affected by the spree of derogatory tweets. On the other hand the original handle name has also been activated by an unknown source who has revealed their further plans to unleash dirty secrets of Kollywood with the hashtag #SuchiLeaks. At present, there is no clarity on who is the black sheep but we seriously hope there is a quick closure to this ugly episode between Dhanush and Suchitra Karthik!