Diljit Dosanjh and Sunny Leone will be seen together in their upcoming song from Arjun Patiala.

Sunny Leone is all set to flaunt her sexy dance moves in comedy film Arjun Patiala’s peppy number ‘Crazy Habibi VS Decent Munda’ featuring Diljit Dosanjh and Varun Sharma. The song Crazy Habibi VS Decent Munda is hyped to be a party number and Sunny showing her moves on it will be the most amazing to see. Also Read - Shehnaaz Gill Turns Sardaar as She Wears Turban Inspired by Diljit Dosanjh - Photos

Crazy Habibi VS Decent Munda song is set to be released tomorrow, July 3. The film stars Kirti Sanon, Fukrey actor Varun Sharma and Diljit. Sunny’s indo-western attire is charming as ever. The neon green bralette and a salwar teamed up with a pair of metallic earrings are just amazing Also Read - Diljit Dosanjh Finally Poses With Shehnaaz Gill After Wrapping up Their Film Honsla Rakh - See Viral Photo

Take a look at the poster here: 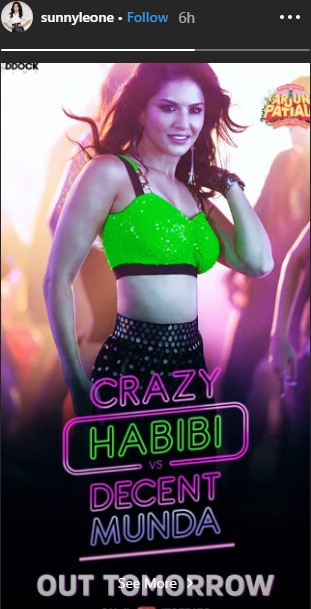 This will be the second time that Diljit will be seen playing a cop. He was earlier seen essaying the role of a cop in Kareena Kapoor and Shahid Kapoor’s film Udta Punjab. Arjun Patiala has been directed by Rohit Jugraj and will hit the cinema screens on July 26.

On the work front, Sunny Leone is working on her upcoming comedy film Kokokola where she is learning a local dialect used in Uttar Pradesh. As the film is based in UP, Sunny is taking lessons to learn the local dialect. The makers of the film, produced by Mahendra Dhariwal, will start rolling the movie by next month end.