The fans are in for a treat as breaking from the monotony of her bold pictures and sensational videos, Bollywood diva Sunny Leone put out a video featuring her at her hilarious best. Seen in the midst of a high-octane commentary of an episode of Sriti Jha and Shabir Ahluwalia’s Kumkum Bhagya, Sunny managed to not only make fans double down with laughter but also actress Nargis Fakhri. Also Read - After 'Sunny Leone' Topped Bihar Junior Engineer Exam, Now Malayalam Actress Anupama Parameswaran 'Clears' STET, Pic Goes Viral

In the shared video, Sunny can be seen donning an emerald green satin nightsuit as she sat bare feet by her bedside, watching the television screen on mute. Filling in for the voice over with her commentary, Sunny was at it for good two minutes. She captioned the video as, “Acting workshop 101 What I do to prepare for my next… Thanks so much Kumkum bhagya and @itisriti @shabirahluwalia one of the best past times is when I can actually watch your show WITHOUT my silly commentary of course! God Bless!” (sic). Also Read - Sunny Leone Practises 'Hot Yoga For Life'

What I do to prepare for my next… 😅 Thanks so much Kumkum bhagya and @itisriti @shabirahluwalia one of the best past times is when I can actually watch your show WITHOUT my silly commentary of course! God Bless! 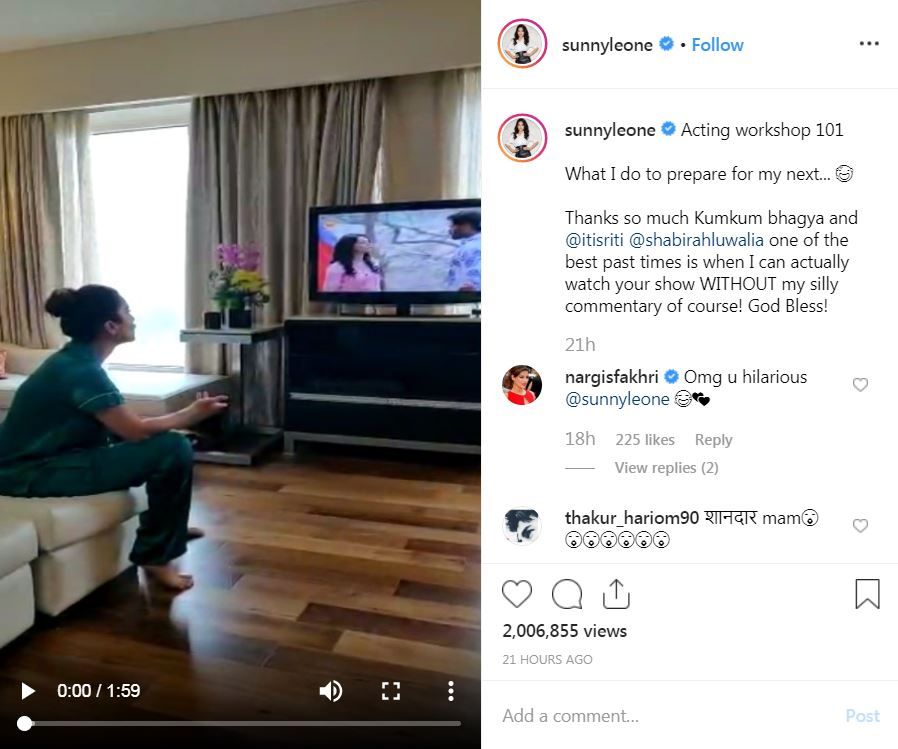 Bollywood actor Sunny Leone is currently working on her upcoming comedy film Kokokola where she is learning a local dialect used in Uttar Pradesh. The bombshell recently took to her Instagram to share a video of her speaking in UP tone. “When you are so much into the character!! #SunnyLeone #MethodActing #kokaKola #UP #BihariDialect”, Sunny captions the video.

As the film is based in Uttar Pradesh, Sunny is taking lessons to learn the local dialect. The makers of the film, produced by Mahendra Dhariwal, will start rolling the movie by next month end.

In an interview with IANS, Sunny Leone shared, “When it comes to my work, I always keep an open mind to learn new things – be it even a new language. It helps me grow as an actor and it is fun to learn new things while on the job. The dialect is something I am working on right now and I am working hard to get it right.” Bankrolled by Mahendra Dhariwal, Coca Cola is based in Uttar Pradesh. Apart from the horror comedy film, Sunny will be foraying into the southern film industry with movies like Rangeela and Veeramadevi.

A few days back, the Pink Lips actor also announced her new venture along with husband Daniel Weber. The duo is all set to open a new store of creativity in Mumbai named ‘The Art Fusion Juhu’. Sharing the post, she wrote, “When you want to do something new in life , go for it !!! Try it , maybe it works or maybe it fails !!! Either way you tried !!! Cheers to our newest and most creative new venture yet !!! It’s going to be amazing !!! Follow @theartfusionjuhu for all details !!! Opening soon !!! @dirrty99.”