Three attacks were carried out in Balakot, Chakothi and Muzaffarabad at 3.45 am, 3.48 am and 3.58 am respectively

The food joint also shared a savage video on their official Twitter account featuring Samuel L Jackson from the cult film Pulp Fiction. However, this is not the first time that Burger Singh has offered discount celebrating India’s defence. Earlier, they offered such discounts during a surgical strike in retaliation to the Uri attack. Also Read - Rajasthan: Parents Name Newborn as 'Mirage' to Pay Tribute to IAF February 26 Strike on JeM Training Camps in Pak

The tweet reads, “In light of today’s airstrike by the IAF on Pakistani terror camps, we offer a 20% discount on all orders on http://burgersinghonline.com  . Coupon code: FPAKAGAIN#Sorrynotsorry #Surgicalstrike2 #FPAK20 #IndianAirForce #IndiaStrikesBack #Balakot #FPAKAGAIN #howsthejosh.” Also Read - Surgical Strike 2.0: Best Bollywood War Movies That Bring Out The True Meaning of Patriotism - Check Out The List

A Delhi based sweet shop is also offering a discount on rasgullas. A Delhi man ordered 50 rasgullas for the Prime Minister’s office. He shared a screenshot of the order online and it has left everyone touched with his gestures. 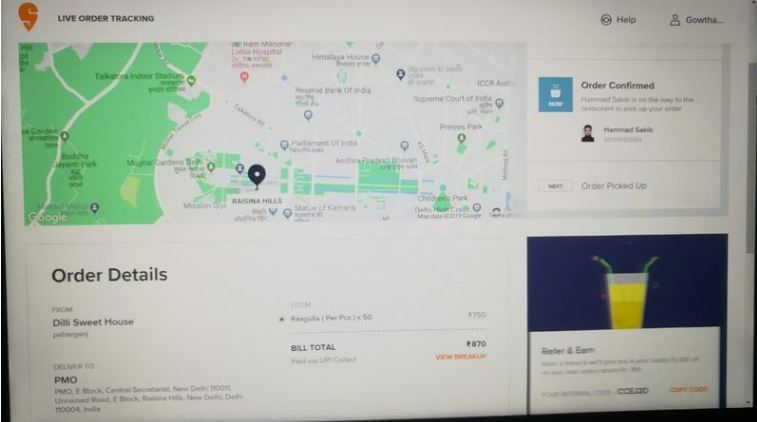 The Indian Air Force in wee hours of Tuesday mounted an offensive on terror hideouts of Jaish terrorists in Balakot, Muzaffarabad and Chakoti areas of PoK.

The strike carried out by 12 IAF Mirage 2000 jets dropped six 1,000 kg laser-guided bombs in all hideouts and killed as many as 300 terrorists, initial reports suggest. “This was an intelligence-based counter-terror strike not a military action for sake of war. Have demolished entire terror set up in the suicide bombing training centre in Balakot, and over 300 terrorists were eliminated in the covert operation by Indian Air Force,” ANI quoted sources as saying.

Three attacks were carried out in Balakot, Chakothi and Muzaffarabad at 3.45 am, 3.48 am and 3.58 am respectively.