Tantrums in the Parliament: Unruly Lawmakers continue to take India for a ride

The Parliament sees actions like pepper sprays, snatching of papers and the flinging of computers occur. Who should be blamed? 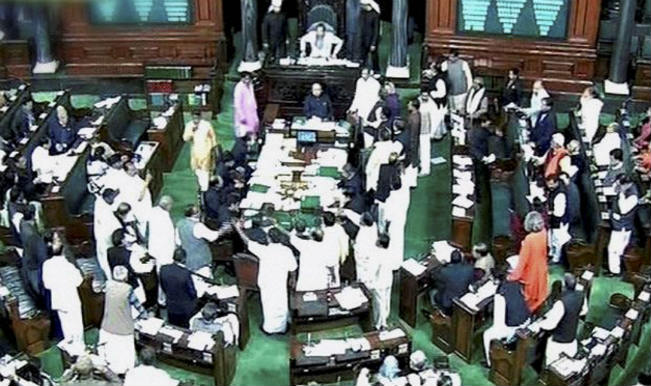 The Lok Sabha MPs took to spraying pepper spray on each other, and one even flung a computer; leaving Speaker Meira Kumar ‘anguished’, and the rest of the country astounded. As if the pepper sprays, the heckling shamed the democracy last week was not enough. An ugly scene broke out in the upper house of the Parliament when a Telegu Desam Party (TDP) MP CM Ramesh tried to snatch papers from Rajya Sabha secretary general, irking deputy chairman PJ Kurien.(Read: Things India MPs can throw in the Parliament)Also Read - Parliament's Budget Session To Begin On January 31, Union Budget To Be Tabled On February 1 | All You Need To Know

Parliamentary democracy was shamed in Jammu and Kashmir Legislative Assembly when Pulwana MLA Syed slapped a marshall. Kashmir’s Pulwana district MLA Syed, stormed into the well, while protesting against the non-availability of ration, to the Kashmiri pandits in the migrant camps. As the marshals were taking him out, he promptly slapped one of them .As if the ugly situation of the physical assault was not enough, Bashir later justified his act. Also Read - Ahead Of Budget Session, Over 400 Parliament Staff Test COVID Positive

Another ruckus in the assembly was when MLAs stood up on chairs, held placards and shouted anti-government slogans. The two RLD members removed their kurtas and stood on their chairs, holding banners of protest. A the shirtless MLAs protest in the UP assembly, the cabinet minister asks the MLAs to strip down and amidst all the situation Akhilesh Yadav is enjoying it all and having a laugh riot. Also Read - BSP MP Danish Ali, Who Attended Parliament till Monday, Tests Covid Positive

Why does Mulayam not have the courage to make his minister who wanted more stripping in the House issue a public apology?

Why has Mehbooba Mufti not sacked the MLA who slapped an assembly member?

Shouldn’t these legislators be booted out of the assembly?

“Un-Parliamentarily” behavior has become commonplace in the Parliament this session. This is not a surprise to most Indians. Verbal abuses and aggression are common in Parliament sessions. Members seldom let each other voice their opinions, which is why decisions and changes are slow and rare. And it is ironical that the ones responsible for the whole ruckus mentions it as mere isolated case. Parliamentarians are very frivolous and do not agree to any rules that check their governance.

The entire political class is behaving like hooligans. It is not just the reflection of the party but the quality of people who reached the Parliament. And it all occurs under the permission of the leader. The problem is that they genuinely think that the rules don’t apply to the politicians themselves. Besides the rules and codes of conduct being there, they do not enforce it upon themselves. There is need for a constitutional change; this is setting a wrong example to the nation. No matter how big is the debate is or how big the counter arguments are, these issues can’t be linked to their crass behavior.

Who should the blame be directed to the governance? Or the legislator?

The global headlines the country will garner for such “un-Parliamentarily” action is very worrisome. What action should be taken against these unruly lawmakers who take India for a ride? We should really mull over who we are giving power to in our country.